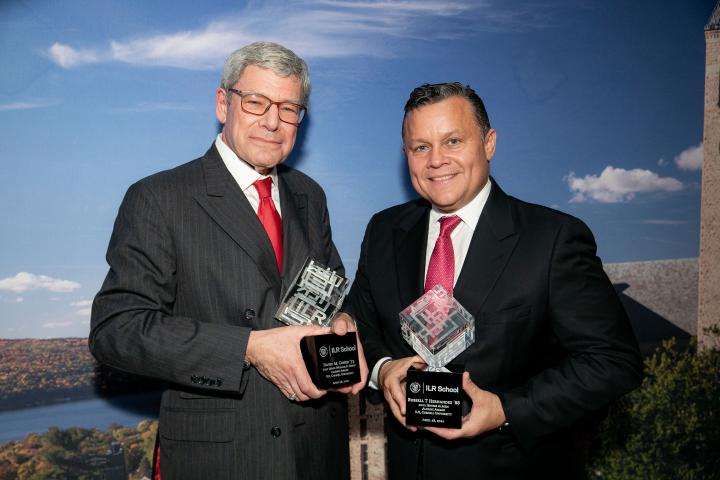 Alexander Colvin, Ph.D. '99, ILR’s Kenneth F. Kahn '69 Dean and the Martin F. Scheinman '75, M.S. '76, Professor of Conflict Resolution, introduced Hernandez as a generous, kind, hard-working person who treats people with respect and compassion, no matter who they are.

He is also a person who shares his thick Rolodex of contacts with ILR whenever needed, Colvin said, noting the 2018 ice storm that stranded 50 students who had bussed to New York City for the day to attend ILR’s Sports Leadership Summit.

Within minutes, Hernandez, a hotel and restaurant developer, had booked hotel rooms for the ILRies.

“He took care of the situation. It’s the kind of guy Russell is. He helps people out,” Colvin said, noting that Hernandez was instrumental in helping ILR secure its office space at 570 Lexington Ave. in Manhattan.

Hernandez, a frequent visitor to campus during the past 10 years as his three children completed their Cornell degrees, said he has stayed at the Statler Hotel 78 times, noting that ILR is part of his extended family.

Colvin, in introducing Cohen, said, “His knowledge, his experience, his depth of insight on labor relations is without par.”

Cohen said he is grateful to ILR and Cornell. “I stepped out of my parents’ car at the bottom of Libe Slope 53 years ago. Almost the entire course of my life since then bears the Cornell imprint.”

He shared a vignette about spending Christmas Eve at his Long Island Railroad office with one of his daughters, Ellen, when she was five. They went in for what was to be just a morning visit, but ended up staying into the evening due to a spontaneous opportunity to negotiate a labor contract that had been stalled for three years.

In closing his remarks, Cohen announced that he and his wife, Abby Joseph Cohen, A&S ’73, have endowed the David M. Cohen Professorship for $3 million to recruit and retain top labor relations faculty.

Colvin also recognized one of ILR’s earliest graduates, Jerry Alpern ’49, MBA ’50, who attended the event. The Alpern Award, named in his honor, was established in 1997 to recognize professionals who provide service and support to ILR and whose career achievements are outside industrial and labor relations.