For Hernandez, ILR is an Extension of Family 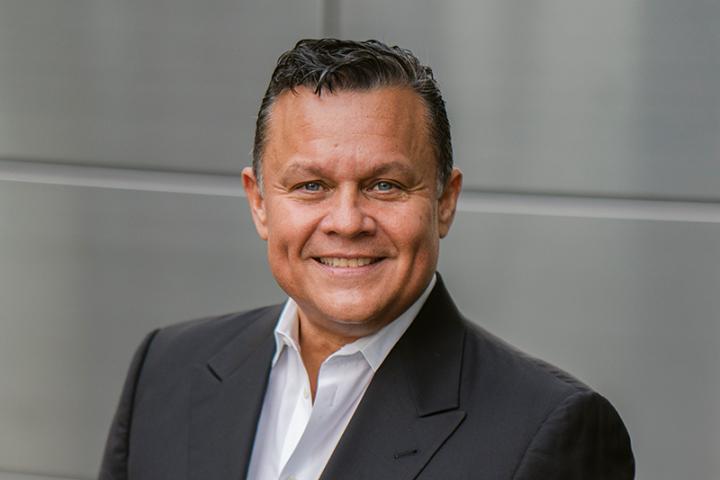 In one of several celebrity collaborations, real estate developer Russell Hernandez ’88 partnered with actor Richard Gere in 2007 to restore the historic Bedford Post in Bedford, New York, to a Relais & Chateaux luxury inn.

Hernandez also is co-owner of the City Club Hotel in Times Square. Over the years, he has owned, developed, operated and partnered in 13 New York City-area hotels and restaurants.

He’s come a long way from the Bronx and Washington Heights, where he grew up the son of a heating contractor. His mother, Lillian Hernandez, an educator, worked three jobs to put him through college.

In recognition of his success and longtime dedication to the ILR School, Hernandez will receive the Alpern Award at the Groat and Alpern Celebration on April 28 in New York City.

Hernandez’s path to ILR was paved by Eddie Gonzalez, then-head of ILR Extension in New York and a friend of his aunt, Helen Padilla. Hernandez arrived on campus a few days into the fall 1984 semester, having missed Orientation to visit his high school sweetheart and future wife, Alessandra, who was living in Italy at the time.

“Growing up around the construction industry in New York in the 1970s and 1980s – and getting summer jobs in apartment buildings, hotels and retail spaces – I experienced a lot of interesting scenarios with unions,” he says. ILR gave him perspective on the labor-management dynamic.

Foremost among skills he learned at ILR were how to negotiate and how to manage people. “The school made me who I am today,” he says. “It shaped the way I think about and approach business.”

As a result, when Hernandez built hotels, he was able to negotiate union deals. And, his company has no attrition. “About 20 people work for me – from New York to Florida to Los Angeles to Colorado – and no one ever leaves. I’ve had employees for 25, 30 years.”

He credits the “incredible mentors” he had at ILR – among them Emeritus Professor David Lipsky, “who continued to be a mentor even as I got older.” In recent years, former deans Harry Katz and Kevin Hallock have also been influential.

Equally influential to his Cornell experience were his brothers from Delta Chi fraternity. “My dearest friends to this day are from Delta Chi,” he says.

After graduating, Hernandez went to work for his father, who was starting an environmental business. A few years later, a Delta Chi brother introduced him to a hotel developer; shortly thereafter, Hernandez joined his company, Gotham Hospitality Group. “From 1991 to 1998, we built 11 hotels in New York City. By the third hotel, he had made me a partner,” Hernandez says.

When the company was sold, he became a contractor. In 2006, he founded Atlantic State Consultants in Pound Ridge, New York, which specializes in residential and commercial development, and Atlantic State Advisors, a real estate management company that administers high-end properties. He also works for individuals in the development and construction of their projects.

Hernandez has maintained a strong connection to ILR, serving on the Dean’s Advisory Council and the Development/Campaign Committee. A passionate fundraiser, he makes calls each year to solicit gifts and has hosted fundraising events at his home. Together, these efforts have raised tens of thousands of dollars for the school.

His passion is fueled by a desire to support ILR and Cornell and “kids like me, who, without financial assistance, would not be able to attend.”

When ILR was seeking new office space in New York City, he helped the school identify options and negotiate terms of its lease agreement.

Civic engagement is equally important to him: Following 9/11, he initiated and led the creation and implementation of the Office of Emergency Management for the town of Pound Ridge. He also serves on the Commission on Judicial Nomination for the state of New York.

Hernandez and his wife, Alessandra Gallo-Hernandez, are the parents of three Cornellians: Gabriel ’17; Serena, HumEc ’19; and Daniel ’22.

“I think of ILR as a small family,” he says. “It’s definitely an extension of my family.”

The Alpern Award is named for Jerome Alpern ’49, MBA ’50, whose outstanding service and support to the ILR School, its students and its alumni, combined with his professional accomplishments outside the field of industrial and labor relations, embody the award’s essence and spirit.