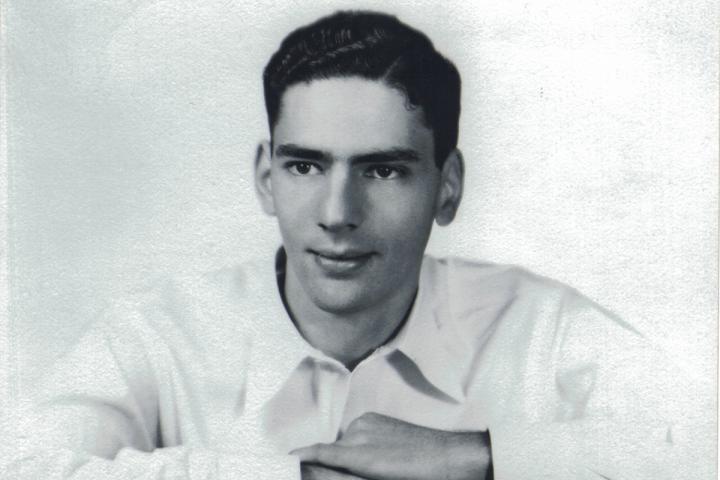 When Jerry Alpern ’49, MBA ’50 was a teenager growing up in New York City, his father was critically injured in a car accident and faced a long recovery in a Boston hospital.

While his father eventually recuperated, the accident set Jerry on a course to become a member of the very first class of the New York State School of Industrial and Labor Relations at Cornell University.

“I was in a lot of trouble all of a sudden,” explained Jerry. “I was skipping a lot of classes at Stuyvesant High School and my brother Daniel, who left in 1942 to go to Cornell as an engineering student, found the Cascadilla School in Ithaca and told our mother, ‘Send him up here. We'll watch him.’”

Jerry was just 15 years old when he moved in with Daniel at his fraternity house, Sigma Alpha Mu, which had plenty of unused rooms due to World War II, and he graduated from the Cascadilla School in January 1945, just one month after his 16th birthday.

“I was the outstanding student in my class. I won all the awards,” Jerry said. “I was also the only January graduate.”

Jerry applied, unsuccessfully, to Cornell’s School of Hotel Administration, and, instead, began his collegiate career at New York University in the summer of 1945. But, when he heard about the soon-to-open ILR School, he decided to take another shot at Cornell. He applied as a transfer student and was accepted into the historic first group of students.

“Most of the first students were veterans who were coming back because peace had been declared, so I think I was perhaps, even with half a year of college, still the youngest member of the class,” he said.

As an official member of the Cornell campus, Jerry pledged Sigma Alpha Mu, and eagerly awaited the return of his brother, Daniel, who had joined the U.S. Navy, but had applied to transfer into the ILR School upon his return.

Tragically, in February 1946, Daniel slipped as he stepped off a ship to board a small boat and drowned off the coast of Korea.

“It crushed me then, and it still does,” Jerry said. “Fortunately, members of the fraternity who knew me as a kid began to come back from service and they helped me.”

One winner of the Alpern Prize was David Lipsky ’61, the Anne Evans Estabrook Professor of Dispute Resolution, former director of the Scheinman Institute on Conflict Resolution and former dean of the ILR School. “I am very pleased that my parents were able to help support the school and many students through the scholarships. And, one of our students who received that prize was Dave Lipsky.  I always kid him that if he didn't receive the prize, he would have never become a dean of the school.”

While his fraternity brothers helped him cope with the loss of his brother, it was one of the house’s social mixers that had a profound effect on his life, as it was there that he met “this wonderful woman who has been my bride and soulmate for 69 years,” Enid Levine, HumEc ’47. "We've been so fortunate that we have two marvelous daughters [Dana M. Alpern and Susan Alpern Fisch, A&S '81], two terrific sons-in-law [John Pollick and Ricky Fisch, ILR '79, JSM '80], and three amazing granddaughters, Sarah, Emily and Abigail."

Jerry went on to become the first ILR student admitted to Cornell’s MBA program and to be dual enrolled in ILR and the business school. He earned his MBA in 1950.

“After graduation, just one person wanted to interview me for a job, and after the interview, the interviewer said, ‘Son, you’re hired,’” Jerry joked.

He worked for his father as personnel manager and assistant treasurer of the Pal Blade Co. in New York City and continued to work well into his 80s as a financial consultant and business adviser. These days, COVID-19 keeps him from going to his office. But, with the help of an associate who brings documents to his house, Jerry still manages his investments and partnerships in order to “stay busy and keep my mind active.”

In addition to his steadfast marriage and his unwavering work ethic, the other constant in Jerry’s life over the past 75 years has been his commitment to the ILR School.

A lifetime member of the Cornell University Council, Jerry has served on the ILR Dean’s Advisory Council and as co-chairman of the ILR School Founders Fund Committee, chairman of anniversary committees, treasurer of the Class of 1949 and permanent chairman of the nominating committee for the Class of 1949.  Jerry received Cornell’s Frank H.T. Rhodes Exemplary Alumni Service Award in 2001, which he considers “one of the greatest honors in my life.”

The Jerome Alpern Award was established in 1997 to recognize professionals who provide service and support to ILR and whose career achievements are outside industrial and labor relations. The award is presented annually at the Groat and Alpern Celebration in New York.

In 2006, the ILR School celebrated the 60th Anniversary of the Daniel Alpern Scholarship and Prize with an event in New York City.

“It was a very special event because all of the past recipients had been invited and many were there,” Susan Alpern Fisch said. “And interestingly, quite a few of them had also received the Groat or Alpern Awards. So, there is notable crossover between those alumni who had won the Daniel Alpern Scholarship or Prize as undergrads and those who became leaders in their field and very loyal, active, and generous alumni. My father takes great pride in that!”

In June 2019, Jerry attended his 70th reunion and chatted with Alex Colvin, the current Dean of the ILR School, and he looks forward to “the next chapter of ILR with him at the helm.”

For Jerry, his commitment to ILR over the years has remained resolute for a simple reason.

“I had the terrible tragedy with my brother being lost,” he said. “And the faculty and administration at ILR carried me through. They were so supportive. At first, I was thinking I would transfer, as the sole surviving son, to be closer to home, but I was encouraged to stay by Professor Morris Neufeld, Don Dietrich and others at the school. So, I owe them a debt. I would not be where I am today without the ILR School. It really is like my family.”

As Jerry finally reflected, “I will always stay connected to ILR, and Cornell remains a central part of my life, as it has for 75 years and counting.”