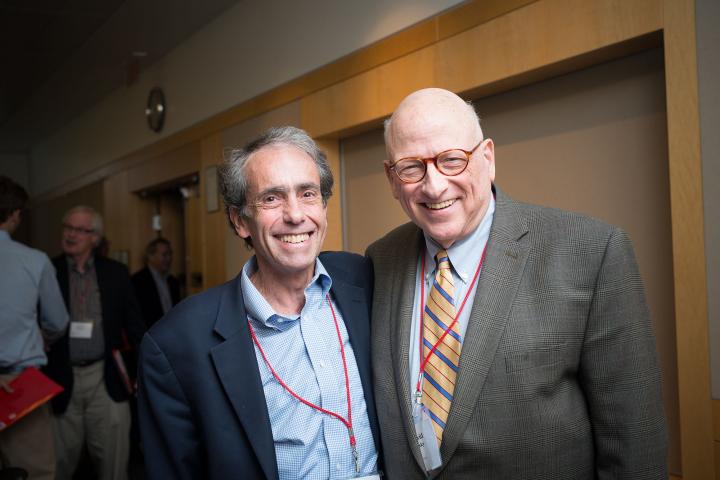 “My professors became friends,” says the 2021 Groat Award winner. “I consider them all part of my Cornell family.”

A leader in the dispute resolution field, John Bickerman ’78, MS ’80, has resolved more than four billion dollars in claims in more than 40 states.

Before a career that includes facilitating the resolution of major disputes between the federal government, Indian tribes and states, though, Bickerman was an ILR student who enjoyed Cornell hockey games, being a gym rat and, occasionally, playing hooky.

The school’s 2021 Groat Award winner, Bickerman offers a seven-week course at ILR every semester. It's part of what he does to give back to the school. In this video, he explains how he teaches the value of applying conflict resolution skills to environmental mediations.

Recently, Bickerman shared some of the experiences that have shaped his ILR journey:

When I came to the ILR School in 1974, I discovered that the school was this wonderful little enclave within a large university. It was the best of both worlds. First year was consumed by required courses, but I did get to take an experimental “Practicum” class, taught by Ron Donovan. The class included experiential role plays and I immediately gravitated to the role of mediator, the profession I wouldn’t pursue until I was in my 30s.

Looking back, the role of the neutral was and is a perfect fit for me and Professor Donovan introduced me to it as a freshman. Because of the school’s size, my professors became friends. Gerd Korman, Maurice Neufield and, especially, Ron Ehrenberg while I was a student. Dave Lipsky, Harry Katz, Alex Colvin and Ariel Avgar in the years after I graduated. I consider them all part of my Cornell family.

Another early memory of Cornell was skipping out on classes in late October to return home to work on a Congressional race. Walking into one of the campaign’s offices, I met a fellow ILR freshman, who, like me, was playing hooky. Billy Gelfond and I became fast friends. He was a constant presence in my life, and the best man at my wedding. Riding home from Ithaca in the back seat of my friend Kenny Bloom’s VW Bug was another memory that I try to forget. The mere look at a VW makes me feel claustrophobic, but Kenny introduced me to the mother of my children, so it must’ve been all worth it. Kenny and I grew up together and we’ve remained close since junior high school.

I also skipped out on my statistics lectures, using the time to learn how to skate backwards at Lynah. I did just fine in the first semester of that class; not so fine in the second semester. I confess, I was an adequate, but not a great student. I hadn’t yet learned how to apply myself or write well. It wasn’t until I was in law school a decade later that I learned to do both reasonably well.

As a freshman, I felt constrained by the large number of required courses for ILR. I was in search of that great liberal arts education. I was constantly finagling ways to convince the registrar why I should be allowed to take a class that wasn’t in the mandatory ILR curriculum. I’m convinced that Ginny Freeman, the registrar, would shut her door when she saw me coming.

But, I did get to take Professor Walter LaFeber’s class on the American presidency and never missed a Saturday morning lecture. I also took art history and music appreciation. By my junior year, I realized that the subject that fascinated me the most was applied economics, and the best place to study it was in the ILR school. ILR had one of the few elite university departments in the United States to teach income security policy. Because I hadn’t taken all the coursework that I’d wanted to take, I applied to and was accepted into the graduate school I spent an additional year getting my master’s under my adviser, Ron Ehrenberg.

I am also very grateful for the school’s requirement to teach labor history with an emphasis on the role immigrants contributed to society. Learning this history has given me a much richer and more nuanced understanding of American society today.

What were your favorite moments at ILR and at Cornell?

It’s hard to pick out just a few moments. Mostly, it’s the people. What makes Cornell special are the relationships I had with students and faculty as an undergraduate and then a graduate student. There are too many encounters to report, but the constant give and take with friends and teachers was a never-ending source of stimulation and enjoyment.

I was also introduced to Cornell hockey. Four years of attending games at Lynah Rink is surely one of my great highlights. Other memories include the first snow that blankets campus, the beauty of the campus, walking home under a clear sky, and the Straight at lunch time with Bruce Springsteen blaring from the jukebox.

Who were memorable ILR professors and classmates?

By far the most important relationship I had was with Professor Ron Ehrenberg. It was his class my sophomore year that spurred my interest to become an economist. Because of him, I applied to be a graduate student and he supervised my master’s thesis. He is also responsible for encouraging me to take my first job in Washington, D.C., with the then Department of Health, Education and Welfare to work on welfare reform. He explained, “You’re going to spend the rest of your life in New York City, why don’t you spend just a year or two in Washington, D.C.!” More than 40 years later, I’m still here.

Years later, after I had graduated law school and started teaching at Georgetown Law, his son Eric enrolled in my dispute resolution class. After Eric graduated, I was able to return Ron’s generosity to me by being a mentor to Eric. Then, a few decades later, my daughter enrolled in Cornell and was one of Ron’s students, completing the academic trifecta. Through the years, we’ve stayed in touch and visit each other several times a year.

Inside and/or outside of the classroom – what has stuck with you in terms of memories or habits based on what you learned at ILR?

There are so many –

For two years, I was one of the people responsible for booking speakers for the university. I invited William Buckley, Elie Wiesel, the Rosenbergs’ son, Michael Meeropol, among many others. And, of course, I got to go to dinner with speakers before their talks. What an incredible trip for a 20-year-old kid.

In my work as an economist working on policy affecting millions of people and later as a mediator, the school showed me the importance of the human dimension and the need to understand people’s needs and interests. Early in my career, working as an economist for an influential non-profit, I was sent to Erie, Pennsylvania, to speak to laid off steel- and auto- workers about the social safety net and the efforts to spare it from further cuts under President Reagan. I gave my talk, full of data, statistics and budget numbers. Afterwards, meeting and talking to the men (and they were primarily men) who attended, I realized how empty the speech must have sounded to them because their hope of regaining their lost standard of living was non-existent. Learning to meet and talk to people where they are is essential to being able to help.

I was also a gym rat, playing endless hours of basketball in Teagle and Barton Halls. I probably would’ve benefited from studying a little harder, instead.

Were there turning points in your professional or personal lives that were influenced by the ILR experience?

I never would’ve applied for my first job if Ron Ehrenberg hadn’t encouraged me, nor would I have been an attractive candidate without the coursework in labor economics. That first job was pivotal both for what I did and likely for why I was accepted at Georgetown as a law student. Learning about the mediator role as a freshman was the reason that I went to law school. I wanted to be a mediator. I had no idea how naïve I was to think I would graduate and instantly become one. Without my ILR background, I would never have been on the career trajectory that I followed.

What else should your fellow ILRies should know about you?

I’ve always valued my education at ILR. Only many years later did I realize that my parents probably didn’t have the resources to send me to an Ivy League school. Because state tuition was so much lower then and I received a few scholarships and had work-study grants, I received a top-notch education. I go back each year to teach, partly for selfish reasons, but also as a way to give back to the school and to “pay it forward” to the next generation. If I can be a mentor or provide guidance to the students I teach, then that’s very rewarding for me, too.