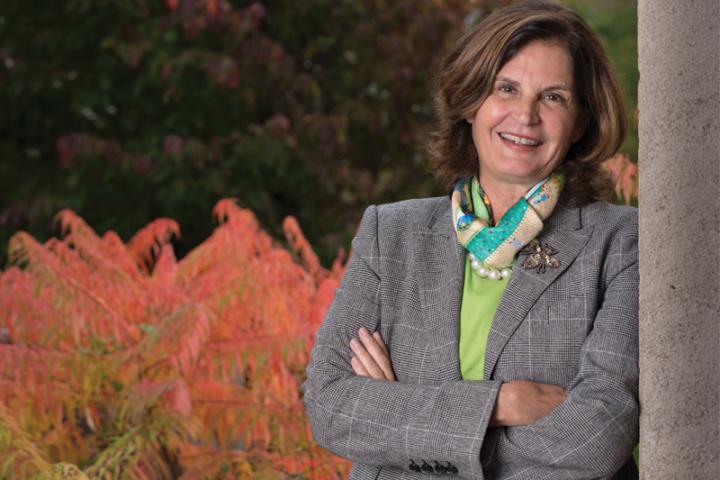 They met when Kathleen was working for the U.S. Chamber of Commerce as a training specialist and Eric was one of 30 executives attending her workshop on how to effectively lobby in Washington, D.C.

When the workshop ended, Eric – a Bethlehem Steel arbitration lawyer known on both sides of the table as a tough, but fair, negotiator – was so impressed with Kathleen that he sponsored her application to ILR.

“You never know who you’re going to meet, or how you can influence people,” said Kathleen, who earned her MILR degree in 1983. “And you never know where life is going to take you.”

Never were those sentiments more on display than during one week in 1981.

Kathleen, who majored in psychology and Spanish at Hood College, was just starting her Cornell career when she attended a “very posh wedding” for a Hood roommate at The Army and Navy Club in Washington, D.C. The next Saturday, she and a Cornell friend, “partner in crime” Karen Thompson, MILR ’83, now a compliance officer with the National Labor Relations Board, donned antennae headbands and homemade “silver snail” costumes made of cardboard and spray paint. Off they went to protest with the ILR Women’s Caucus in support of the Cornell Eleven – a group of former female faculty members who were suing the university for claims of sex discrimination in violation of Title VII of the Civil Rights Act of 1964.

“Cornell had won the ‘Silver Snail’ award for lack of promotions within higher education,” Kathleen explained. “So, we dressed up to make our point.” The award was sponsored by the Project on Equal Education Rights, a branch of the National Organization for Women.

While on the picket line, Kathleen crossed paths with another alum, a Cornell trustee whose wife had also graduated from Hood and “who had been a very dear friend of the bride’s mother.”

“So, here he had just seen me at this very elegant wedding in a bridesmaid dress and the next weekend he sees me dressed in a silver snail costume,” she said. “But, to his credit, he invited me into the trustee meeting and I got to talk about why we were so concerned as a group of students.”

Those are the connections, and the give and take, that were the hallmark of Kathleen’s time on campus.

“When I came to Cornell, what was fascinating to me was that the labor students and the management students, we all got along,” she said. “We all debated the issues. We all agreed to disagree, but we had respect for each other and that has carried me very well in the workplace.”

Throughout her career, Kathleen has used those principles to innovate in the world of human resources. An executive at major firms including Deloitte, SunGard Data Systems (now FIS), Shearman & Sterling and Cisco Systems, Kathleen is now the chief human resources officer at Livent Corporation. There, along with her team and colleagues, she has negotiated collective bargaining agreements in Argentina, brought top talent to key positions in the company and worked on the transformation of the business from a segment of a larger multinational to a successful stand-alone public, independent company.

“The best part of my job right now is teaching the next generation of HR leaders,” she said. “And, working with my leadership team, seeing what we could be as a company, focusing on our culture and our employee values.”

“Those are things I learned at Cornell. ILR really gave me the skills to do what I do.”