Cohen “Fell in Love” with Labor Relations, Made it Heart of his Career 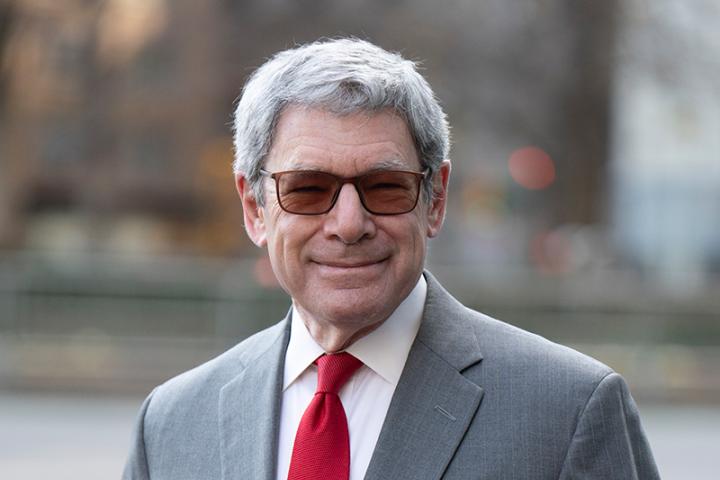 Growing up on Long Island in the sixties, David M. Cohen ’73 had a front-row seat at New York City’s teacher and transit strikes, and the turbulence of collective bargaining.

“Watching Cornell alum Theodore Kheel save the parties from themselves seemed to be an interesting way to combine my interests in law and politics. Thanks to the ILR School, I fell in love with labor relations early and hard,” he says.

“I have joked with Professor Dave Lipsky for many years that I am one of the few ILR alums still doing the full range of traditional labor-management relations. I have been a government official, mediator, arbitrator, negotiator on both sides of the table, had unions go on strike against my employers, handled discipline and grievance cases, and taught classes. Labor relations has been the core of everything I’ve ever done professionally.”

Cohen’s first involvement in collective bargaining came as an ILR undergraduate. Most of his career since has been spent in large, complicated, multi-union environments, where he has served as chief negotiator or chief labor counsel.

In recognition of his achievements and longtime dedication to the ILR School, Cohen will receive the Groat Award at the Groat and Alpern Celebration on April 28 in New York City.

Cohen retired in June 2021 as executive deputy commissioner for administration for the New York City Department of Environmental Protection, where he was responsible for the full range of human resources issues.

Before that role, Cohen was employed by the New York City Police Department. In 2006, he was invited to meet with Police Commissioner Ray Kelly, who “spent an hour telling me the labor problems he had that I was going to solve for him. Needless to say, I took the job as assistant commissioner of labor relations for the New York Police Department, and shortly thereafter was promoted to deputy commissioner and labor counsel.”

Before joining Columbia, Cohen was a senior consultant for the Hay Group, an independent labor relations consultant, director of labor relations for the Long Island Rail Road and labor counsel for the Metropolitan Transportation Authority. After earning a law degree at George Washington University in 1976, he stayed in Washington, D.C., for a decade, holding labor positions with the federal government and serving as chief hearing officer of the National Mediation Board, before returning to New York.

As an ILR undergraduate, Cohen amassed 36 graduate credits. “I took advantage of the freedom in my last two years to take whatever courses I wanted at whatever level I wanted,” he said. And, he formed close relationships with faculty – most notably, his mentor, Emeritus Professor David Lipsky, with whom he remains friends.

Thanks to a referral from Lipsky, Cohen did two semesters of independent study with a school superintendent in Deposit, New York, who needed a notetaker during contract negotiations. “To sit at the bargaining table as a member of the bargaining team as a college junior was a unique experience,” he says. “It gave me a perspective unlike any classroom experience.”

Senior year, he advised non-instructional employees in Interlaken, New York, who were negotiating a contract independent of the teachers union. “Every time we had a bargaining session, I’d drive to the other side of Cayuga Lake and we would spend a few hours with the school board and their negotiators,” he says. “Ultimately, they got their own treatment separate from the teachers. They were looking for that measure of respect, and I believe that I helped get it for them.”

Cohen, who “has been heavily involved with the ILR School forever,” has guest lectured on campus and hired, mentored and sponsored students for many years. He also supports faculty research.

In 2007, he and his wife, Abby Cohen, A&S ’73 – who he met in an economics class the first semester of their freshman year – launched the “Globalization and the Workplace” program with ILR International Programs. More recently, he sponsored the David M. and Abby Joseph Cohen Summer Research Fund.

Cohen is an emeritus member of the ILR Dean’s Advisory Council, a life member of the Cornell Council and chair emeritus of the Cornell Hillel board of trustees. Abby Cohen is a Presidential Councillor, has served on the boards of Cornell and Weill Cornell Medicine, and chairs the steering committee of the Jacobs Technion-Cornell Institute.

The Cohens were honored by Cornell Hillel in 2006, when they received the Tanner Prize, named in honor of ILR alum and University Board Chair Emeritus Harold Tanner, for their contributions to Cornell and the Jewish community. David and Abby were named foremost benefactors of Cornell University in 2008.

“To the extent that I can help other students have the same kind of fulfilling and interesting career that I’ve had, I feel compelled to do that,” he says.

“It’s important that those of us who have had the advantage of the education that Cornell provides sustain it for the next generation of students and the generations to come.”

The Cohens are parents of two Cornellians: Ellen, A&S ’02, and Lauren, A&S ’08. “They were both warned that if you do Cornell properly, it’s for life, and they decided to enroll anyway,” Cohen says with a laugh.

The Groat Award, established in 1971, honors Judge William B. Groat (1899-1986). As counsel to the New York State Joint Legislative Committee on Industrial and Labor Relations, he played a pivotal role in founding the ILR School and drafting its charter.