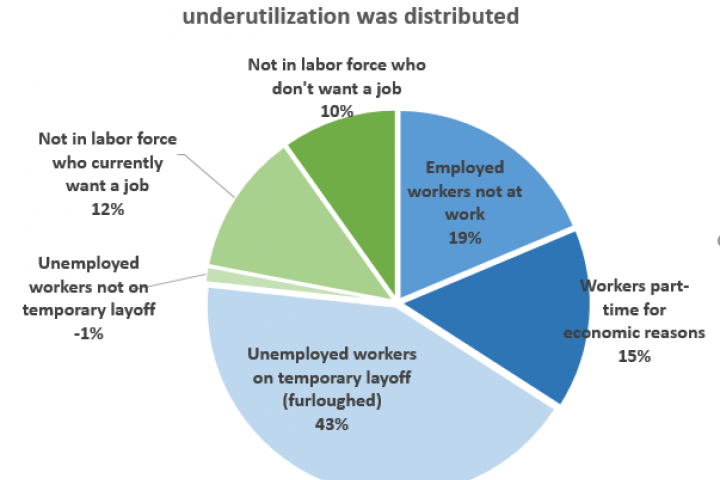 The jobs report (formally, the Bureau of Labor Statistics’ Employment Situation news release) for April 2020 is out. You’ve probably already seen media coverage that highlighted the scary numbers about the impact of COVID-19 on jobs and mentioned some confusing caveats. In this post, I present my quick parsing of what this adds up to.

Yesterday, I published a post to set the stage for today by giving the background on why the monthly Employment Situation release is so influential. I also discussed some indicators that I would be focusing on. I won’t repeat all that background here, so it may be helpful to read that post before you go further.

1. There are not serious data quality issues, although putting together the report was challenging.

2. The release documents a labor market slump of historic magnitude.

Because extreme restrictions were imposed abruptly, we can compare current numbers with those for February, which is before there was much impact from the pandemic. Changes happening for other reasons over these two months will be swamped by the COVID-19 influence, so we will not worry about them. The first three categories capture workers whose relationships with an employer are intact despite disruptions, in contrast to the latter three. See here for why that matters.

The bottom line is that the jobs of about 23.4 percent of employed workers were suspended or curtailed by COVID by mid-April. The largest segment of those are workers on temporary layoff. Of those affected, about 79 percent preserved a relationship with their employer. The pie chart shows the percentages of impacted workers, with blue slices where the relationships between employer and worker are maintained.

Most starkly, all of the permanent job losers exited the labor force (that is, they are not actively looking for work). And, close to half of those say they do not want a job at the moment.

The high share (79 percent) of maintained relationships with employers should be helpful for speeding the recovery when restrictions are lifted. However, this alone cannot guarantee a rapid recovery, because ties can weaken over time, some employers will not survive long enough to recall their workers and other employers may need a new business model with different staffing requirements.