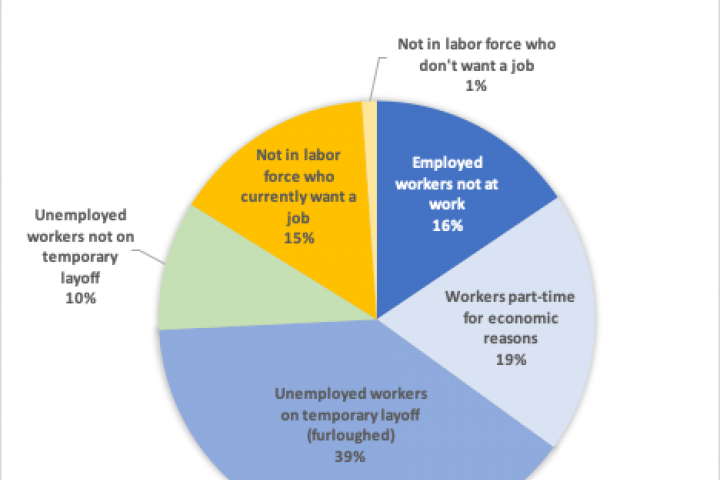 The June 2020 Bureau of Labor Statistics jobs report (that is, the Employment Situation news release) shows that as of mid-June, U.S. labor market conditions showed continued partial rebound from the depth of the shutdowns in April. This post presents my quick parsing of the report. A later post will examine differences by gender and race.

In March, I published a post on why the jobs reports are so influential and what indicators I track to understand the impact of COVID-19. Also see subsequent updates for April and May. I do not repeat that background here.

My measure of COVID-19 disruptions is simply the change in the number of workers in each category since February. The first three categories capture workers whose relationships with an employer are intact despite disruptions, in contrast to the latter three. See here for why that matters. (Note for wonks: I use seasonally unadjusted data, for comparability.)

Most of June’s rebound took the form of 4.4 million fewer workers on temporary layoff. This likely reflects the ease of recalling workers from temporary layoff, aided in some cases by the Paycheck Protection Program. Less positively, it can also result from the conversion of temporary layoffs to permanent ones.

The other sizable improvement was in the number of people out of the labor force who said they did not want a job. Interestingly, in both May and June, this segment declined much more than the category of people who said that they want a job.

Of those still disrupted, 39 percent are on temporary layoffs (furloughs). Another 16 percent were employed but not at work, which includes business owners who are shut down, misclassifications of workers on temporary layoff and other unusually high use of leaves from work. Another large group (19 percent) is working short hours. In all, 74 percent of disrupted workers maintain a tie with an employer. These are shown in the blue slices of the pie chart.

The share that are unemployed with no connection to an employer climbed to 10 percent of disruptions in June. And in contrast to April, almost all of the COVID-19-related increase in those out of the labor force now consists of people who said they do want a job. Their share of disruptions is 15 percent, compared to the 1 percent who do not want a job.

In the best-case scenario, April will turn out to be the job market trough of the COVID-19 downturn. That is, subsequent reports will show declining unemployment rates and further job growth. Why would it be the trough? Since May, states have phased out many restrictions, allowing more workers to return to work. Furthermore, substantial Paycheck Protection Program funds went out in May, funding the recall of many workers.

Even if April was the trough, we are far from assured of a rapid recovery. The high share (74 percent) of maintained relationships with employers should be help speed the recovery when restrictions are lifted, particularly early in the recovery. Yet, much could go wrong.

Risks from renewed virus infections, more civil unrest or lack of fiscal policy support could derail or slow the nascent recovery. June’s unemployment rate is higher than at the trough of the Great Recession. Many states may soon need to forestall or reverse reopening steps. Furthermore, most provisions of the CARES Act will expire soon. Initial unemployment insurance claims tell us that layoffs were still high throughout June, so those are increasingly likely to be recession fallout, rather than direct impacts of the COVID-19 shutdown. Confidence, investment and spending will take time to restore. Even employers who intended to recall their workers may go bankrupt instead of reopening or may need to adopt a new business model with different staffing requirements.

In sum, after two months of rebound, job market conditions remain dire and downside risks are high. Thus, policy will be very important to help support as robust a recovery as possible.