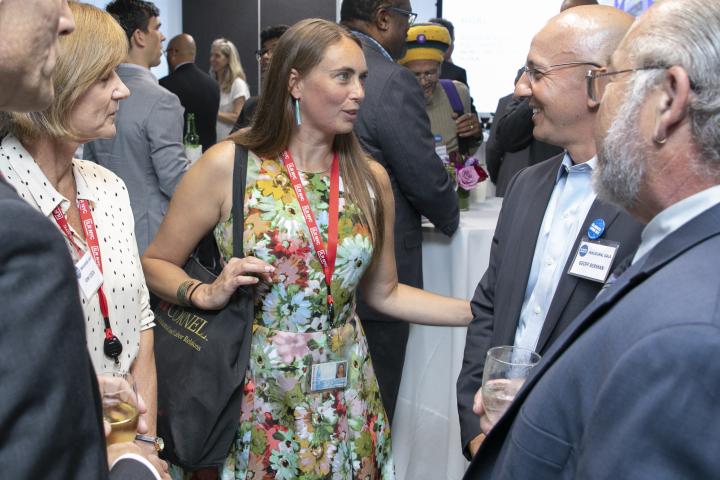 As the Cornell University ILR School Climate Jobs Institute marks its official start tonight at an event in New York City, numerous organizations and people – state, local and national officials, along with students, members of the public and many others – are sharing their support.

Among them are Mike Fishman, president and executive director of the Climate Jobs National Resource Center.

"Through our close partnership, the Climate Jobs National Resource Center and Cornell’s Labor Leading on Climate Initiative have supported unions and climate jobs coalitions organizing for transformative, pro-worker climate action across the country,. We’re proud to take part in the launch of the Climate Jobs Institute at Cornell, and to celebrate the leadership of Lara Skinner. The institute will serve as an invaluable resource as we strive to build an equitable future for workers and the planet," he said Tuesday.

Skinner, institute director, has been working with labor coalitions and other entities for more than 10 years on research and policy that helps create jobs that align with climate targets and also advance economic, racial and gender equity. The institute, which is part of ILR’s Center for Applied Research on Work and of The 2030 Project at Cornell, is the academic partner of the resource center.

Labor coalitions in Maine, Rhode Island, Illinois, Texas, New York state and New York City have adopted plans developed by the institute, and many organizations and individuals who support the creation of climate jobs consider the institute’s work essential.

“Fighting climate change and creating jobs go hand in hand,” said Antha Williams, who leads Bloomberg Philanthropies’ Environment Program. “Bloomberg Philanthropies has been glad to support the Climate Jobs National Resource Center since its launch, and the creation of The Climate Jobs Institute at Cornell will further this critical work to ensure our transition to an equitable, clean energy economy has the diverse, robust workforce needed to reduce emissions, protect public health, and strengthen our economy.”

A number of testimonials have been shared with the institute. They include:

Congratulations to Cornell ILR on its new Climate Jobs Institute! Climate change and inequality are the most important issues of our time. To secure the union climate transition New York deserves, we need excellent research and educational programs from universities like Cornell to help us navigate this historic transition.

Cornell ILR has led the way in bringing attention to the labor and employment impacts of climate change and clean energy. As we address climate change, we also have to ensure that we are creating good jobs and improving the lives of working people. Congratulations to Cornell ILR for establishing a new Institute dedicated to this important work.

The new Climate Jobs Institute is a powerful example of how Cornell University is mobilizing to support ambitious action on climate in this decisive decade. It embodies the values that addressing climate change should leave no one behind and that climate work is not just planning for the future but also creating good jobs and better quality of life in the here and now.

Working class people are closest to the consequences of climate change and the promises of a new economy. It is imperative that trade unions are leaders in the effort to eradicate the consequences of a changing climate and develop an economy that benefits workers and not corporations. Cornell’s ILR Climate Jobs Institute is a critical part of meeting these worthy goals. Congratulations on the launch of the Institute, our union is proud to be part of its mission.

Congratulations on launching Cornell ILR’s Climate Jobs Institute! This is a pivotal moment to develop impactful policies that will prevent further impacts of climate change while also protecting and creating family-supporting jobs. We look forward to working closely together to advance these goals in New York and across the country.

Cornell ILR has provided invaluable support to the labor movement in developing a set of worker and equity-centered initiatives to address climate change in a way that creates good jobs that improve the lives of working families. Congratulations to Cornell ILR for creating the Climate Jobs Institute to expand on the important work they have been doing.