Mapping Workers at Risk of Layoffs and Loss of Health Care 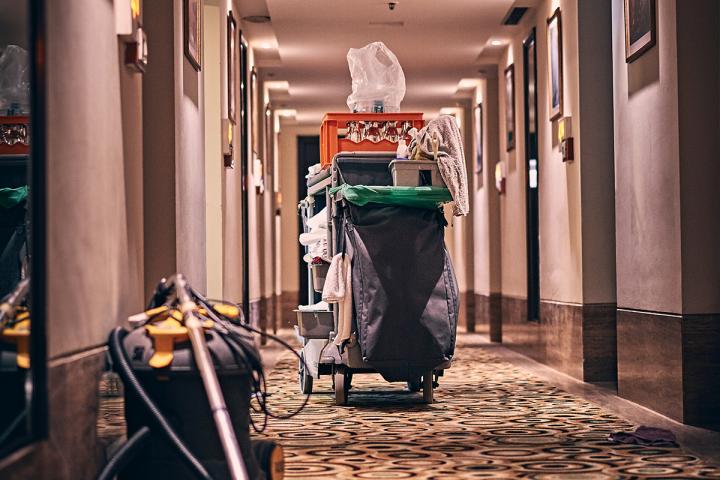 According to new data developed by the NYU Furman Center, nearly one in every three civilian workers in New York state – about 3 million New Yorkers – work in occupations that are at risk of mass layoffs or closures.

We're breaking down this data into worker categories by race, wage, geography and participation in employer-provided health care programs. We're answering questions about who is at risk of job loss, where workers in at-risk occupations live and how many workers in at-risk occupations depend on employer-provided health care programs. We find that:

At bottom, this data shows how the “COVID-19 crisis is magnifying the importance of equitable public policy and exposing the structural problems that persist in our health systems and economy.”

Who is at risk of job loss?

Furman Center researchers analyzed 530 unique, detailed job titles to identify workers who are most likely to experience job or income loss due to the COVID-19 public health crisis. Combining their expertise with insights from related projects, the Furman team singled out 109 specific occupations that have the “highest risk of mass layoffs and workplace closures due to the pandemic.” Merging those occupation codes with the most recent U.S. Census American Community Survey (ACS) Public Use Microdata Samples (PUMS) reveals that more than 2.96 million New Yorkers work in at-risk jobs. Nearly half of those workers are in the Service sector. The Sales and Construction sectors have the second and third highest totals of at-risk workers, respectively. 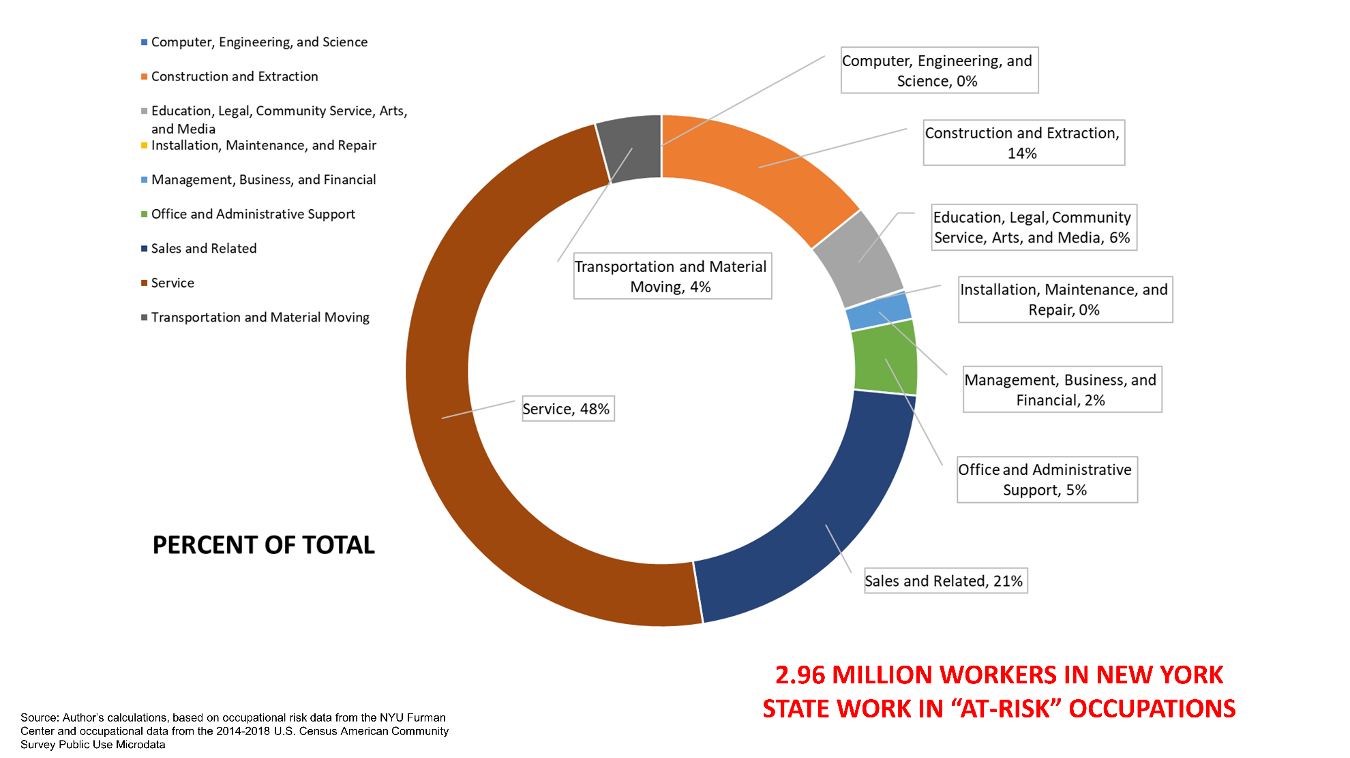 Next, despite accounting for just 41% of New York State’s 9.43 million civilian workers, persons of color—defined as persons who identify in Census Bureau data with a racial or ethnic category other than white, not Hispanic or Latinx—account for 52% of workers in at-risk occupations. As a group, nearly two in every five workers of color (1.5 million out of 3.9 million, or 39.3%) hold at-risk occupations, compared to around one in every four white workers (1.4 million of 5.5 million, or 25.8%). Put another way, persons of color in New York State are around one-and-a-half times more likely to hold at-risk jobs than non-Hispanic white workers.

Low wage workers—defined as persons who earn below $15/hour —are similarly prone to hold at-risk occupations. Such workers make up just 35% of the State’s civilian workforce but hold 55% of its at-risk jobs. Consistent with recent observations that low wage workers are especially vulnerable to COVID-related layoffs, the data suggest that around one in every two low wage workers across the State could lose their jobs as the pandemic unfolds (1.6 million of 3.3 million workers, or 49.2%).

Based on the preceding numbers, the answers to who is at risk of job or income loss due to COVID-19 are:

Where do workers in at-risk jobs live?

The Census Bureau dataset used to study workers in at-risk jobs does not provide information on a worker’s county of residence directly. Rather, counties need to be identified indirectly, “where possible, from other…geographic [information].” According to the data provider IPUMS, an initiative of the Minnesota Population Center and leading source of Census microdata, there are only 21 counties in New York State that are identifiable in the database in this way. The remaining 41 counties are grouped together under a generic geographic code. With that in mind, it is not possible to map at-risk workers in every county in the State. However, it is possible to show that the geography of at-risk workers follows population. Put differently, the majority of at-risk jobs are downstate, with the most extreme concentrations in the Bronx (44% of civilian workers), Queens (39% of civilian workers), and Kings County (35% of civilian workers) portions of New York City (NYC). Together, these three areas account for more than 1.1 million at-risk workers, or 38% of the at-risk worker population.

In the remaining geographic areas, the percentage of the civilian workforce in at-risk jobs ranges from a low of 25% in New York County (downstate) to a high of 31% in Oswego County (upstate). Statewide, more than 31% of civilians work in at-risk occupations. 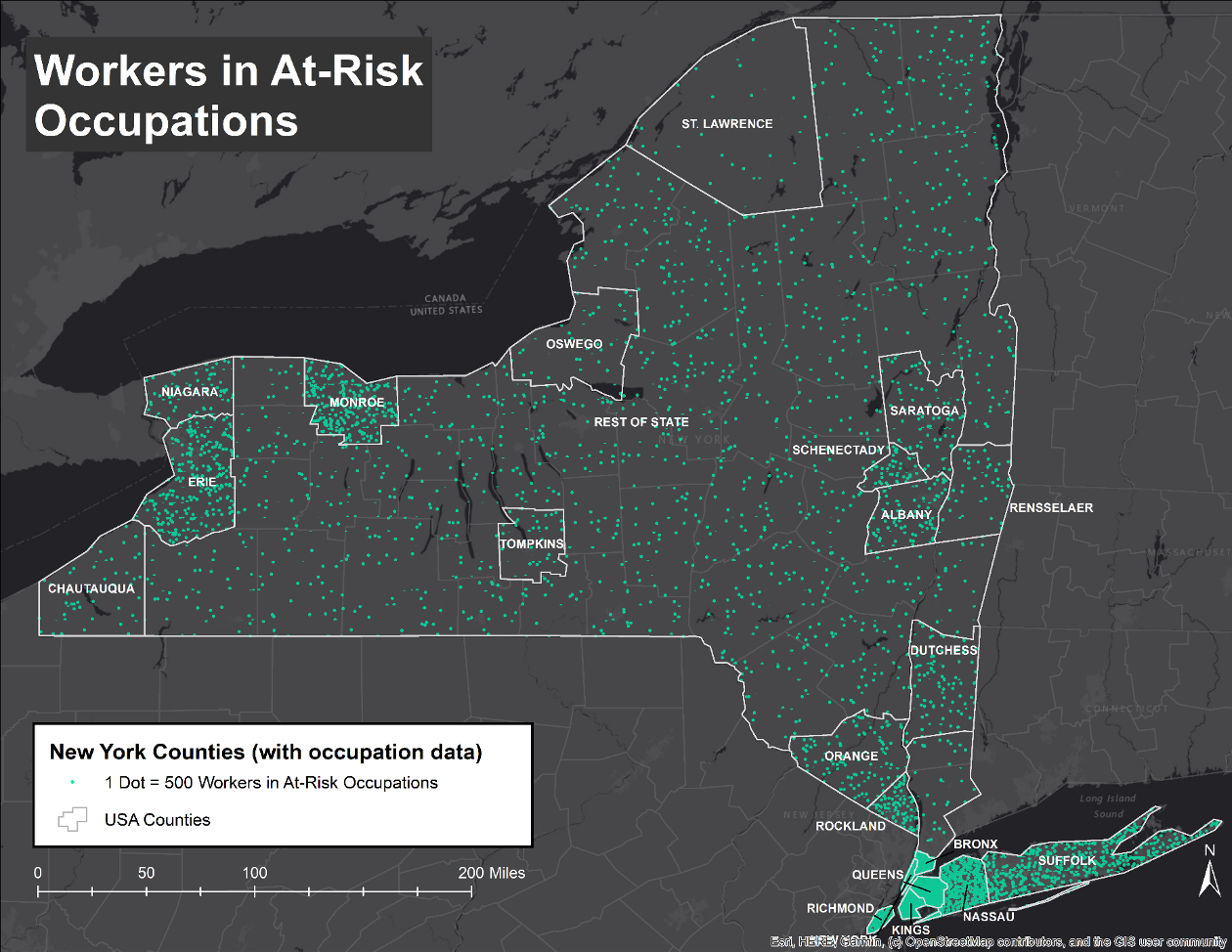 *Refer to the opening paragraph of this section. Only 21 counties in New York can be identified in the data used to study at-risk workers. The remaining 41 counties are grouped together under a generic geographic identifier

Based on the information from above, answers to the question of where at-risk workers live include:

How many workers in at-risk jobs depend on employer-provided healthcare programs?

The last two weeks offered a glimpse of how historic levels of unemployment claims due to the COVID-19 pandemic are already overwhelming State agencies as they work to deliver benefits to the newly jobless. While Departments of Labor were the first to feel these effects, State Health Plan Marketplaces and systems for reviewing and approving Medicaid applications are probably next in line. According to our data, around 6.6 million of 9.4 million civilian workers in New York State (70.6%) have health insurance through their employers. Nearly one-quarter (1.6 million, or 24.1%) of these workers work in at-risk occupations. Put in terms of the total Statewide civilian workforce, 17% of all New York State workers are at risk of losing their jobs and health benefits due to the pandemic. In other words, mass layoffs in at-risk occupations could strip around 170 of every 1,000 workers of income and immediate access to healthcare at the same time.

As was the case with the geographic distribution of at-risk workers in general, workers in at-risk jobs with employer health benefits are found throughout New York State. Once again, though, the distribution follows population. The highest counts of at-risk jobs with employer health benefits are found downstate, particularly in the counties that make up New York City. When adjusting the raw counts into rates per 1,000 civilian workers, however, a slightly different picture emerges. As illustrated in the table below, the highest rates of workers at risk of losing their employer-provided healthcare due to COVID-19 are found in Dutchess and Orange Counties in the Hudson Valley area. Those rates are followed by the downstate counties of Richmond and Suffolk, with Western New York’s Niagara County close behind to round out the top five.

*See above. Only 21 counties in New York can be identified in the data used to study at-risk workers. The remaining 41 counties are grouped together under a generic geographic identifier 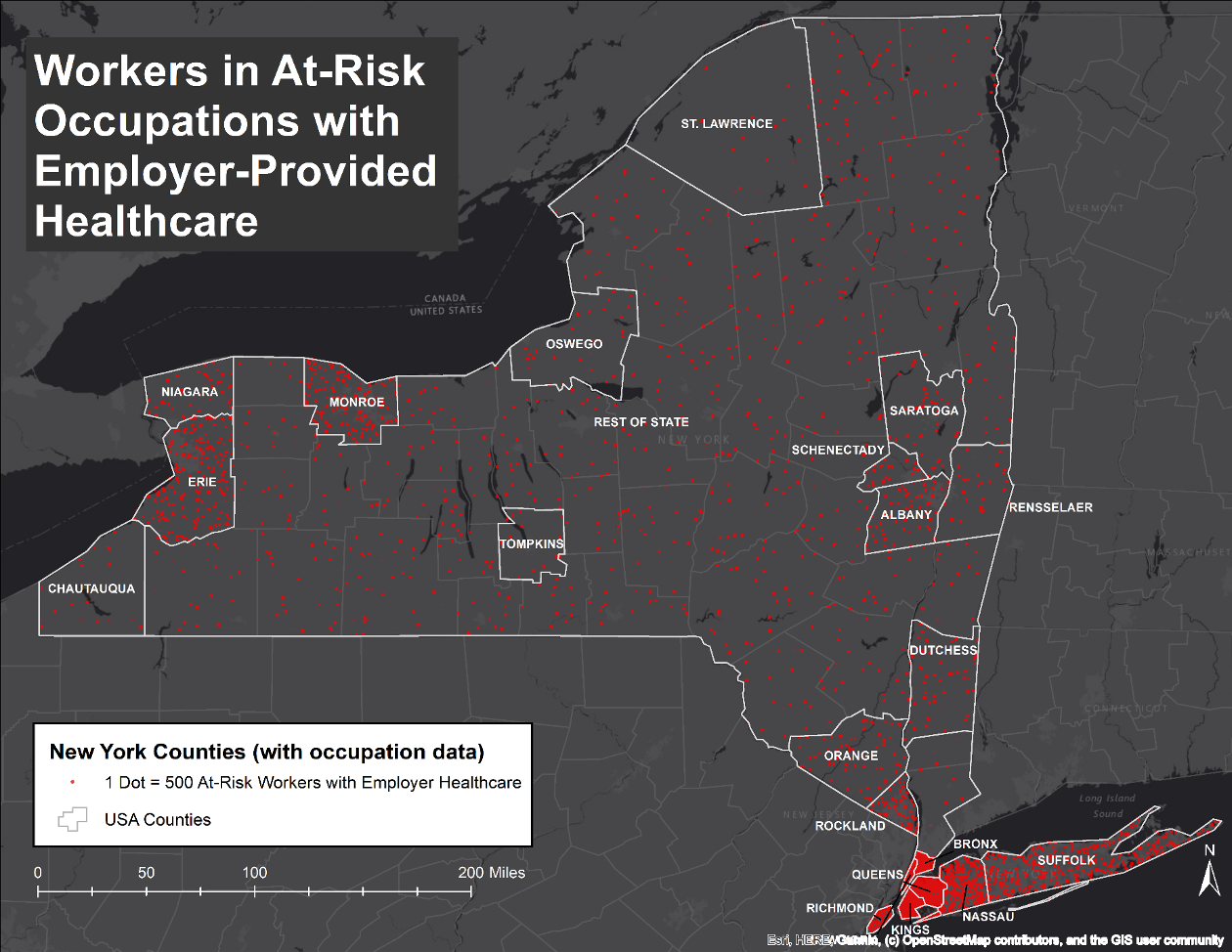 When expressed as a rate of the total civilian workforce, employees in occupations that face the dual risks of layoff and loss of health benefits are more likely to be found upstate. Chautauqua and Tompkins are the only two upstate Counties where the rates of such workers are less than the Statewide average (around 170 of every 1,000 workers). All remaining upstate areas exceed the Statewide average.

Along these lines, answers to the question how many workers in at-risk occupations depend on employer-provided healthcare programs include:

Only time will tell how large the COVID-19 layoff wave will be and whose livelihoods will be swept away by it. In the meantime, as we begin to plan for recovery and life after the pandemic, the initial data are making two things crystal clear: