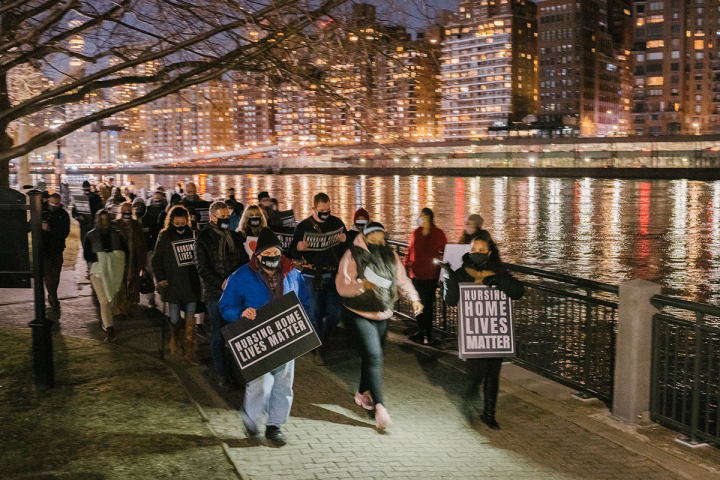 After a fall semester in which Cornell students took the majority, if not all, their classes online, this past spring saw a record 76 ILRies take advantage of the ILR Credit Internship Program, which affords juniors and seniors the opportunity to gain professional experience while also receiving a full semester’s credit.

OPEN DOORS is an “arts-and-justice alliance of artists, activists and advocates” that operates out of the Coler Nursing Home, a long-term care facility that houses a number of gun violence survivors dealing with spinal cord injuries.

Henry, who has secured a job with Google after interning there last summer, says she was drawn to the OPEN DOORS internship because with the pandemic and ongoing social unrest, she felt she was at a “breaking point in terms of wanting to do something about the state of the world.”

The daughter of an occupational therapist, Henry has always been interested in disability rights and began taking disability courses at ILR in her sophomore year. She credits ILR lecturer Allison Weiner Heinemann’s disability-related “Writing Seminar in Law” class for fueling her interest and influencing her senior honors thesis, which looks at the juvenile mass incarceration crisis from an intersectional lens that focuses on race, gender and disability.

Henry said, OPEN DOORS “was the only internship I applied for because I knew I wanted to do work with a social justice-oriented organization and get the experience of grassroots organizing and disability rights. The organization OPEN DOORS is very interesting because it's a justice initiative that's under the Center for Transformative Action. I just think it's so cool just to be a part of something that's so different.”

Morgan, on the other hand, applied to several internships and wasn’t completely sold on OPEN DOORS until the film minor spoke with fellow ILRie Alex Eshelman ’22 and discovered the position would offer him the opportunity to work on “Fire Through Dry Grass,” an upcoming documentary about New York City’s decision to place COVID-19 positive patients in Coler Hospital, where many of the OPEN DOORS members reside.

For Morgan, his interest in disability studies stems from his brother, who is on the autism spectrum, and has been fostered by taking classes with Susanne Bruyère, academic director of the Yang-Tan Institute.

“I still haven't found my ILR niche per se,” said Morgan, “but, I think disability is something I would like to look into more in the future. I’m also minoring in film, so that's why OPEN DOORS was such a cool opportunity for me. It cuts across basically everything that’s on my checklist – arts, disability focused, minority groups, oppressed people. It’s why I gravitated toward this internship.”

In her day-to-day work, Henry produces content and helps maintain the OPEN DOORS’ social media presence, assists with grant writing and works to connect the Reality Poets with individuals who can assist their organization.

The Reality Poets are at the center of the OPEN DOORS network. They are current and former residents of Coler Hospital, who are bonded through a shared mission to spread a message of realness, resilience and healing. Through art and storytelling projects, these men work to warn others of the dangers of street violence while exposing injustices that breed violence in cities and prevent some survivors from stepping into full, purposeful lives.

Henry is also instrumental in managing the meetings for the Nursing Home Lives Matter movement.

Recently, both she and Morgan helped organize an in-person rally for the group to mark the one-year anniversary of New York’s nursing home lockdown.

“It was a really interesting experience because we didn't get to go to the event, but we had spent so much time planning it,” she said. “I was sending out press releases and making all the promotional materials along with my co-director. I was also running meetings to plan logistics and set an itinerary and a schedule for an event that I couldn't even go to.”

Morgan also works on the OPEN DOORS’ social media campaigns, and helps with some organizational aspects of the Reality Poets, but he spends most of his time working as a production assistant for the documentary – a role he’ll continue throughout the summer before studying abroad in the fall.

As a production assistant, Morgan serves as a jack of all trades, doing whatever needs to be done to help the project run smoothly. One day, he might track down newspaper clippings to help contextualize the effect COVID-19 is having on nursing homes and people with disabilities, and, another day, he may work on getting release forms signed by the film’s participants. He is also responsible for handling the film’s social media presence.

“It's been so fun,” Morgan said. “Our executive producers [Sara Bolder and Jim LeBrecht] were involved with the Oscar-nominated documentary Crip Camp. There are really big people in both the film and disability community attached to this documentary, and the message is incredibly important. So, I'm really happy that my first film is something so big, because even if the film thing doesn't work out for me, I can still smile in the mirror and be happy knowing I was involved in telling this story.”