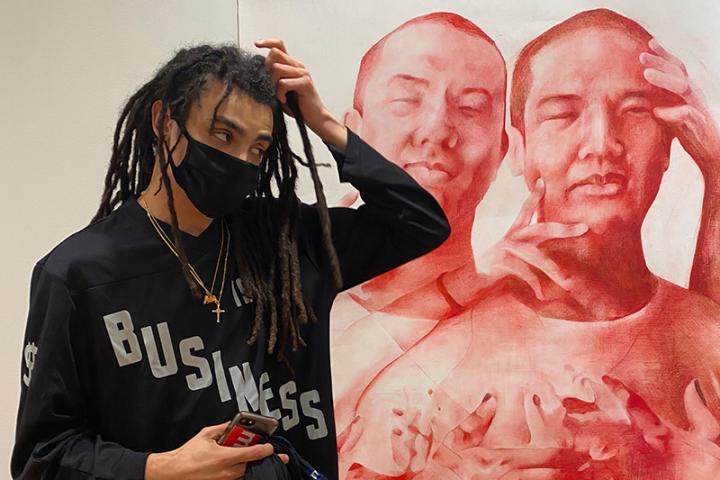 “When I was really little, I loved to color,” Alex said, although he also remembers being told by adults that artists never make money and that he must choose a different career. Years later, however, Alex is combining what he is learning at ILR with his long-time passion for art in work with the New York City-based OPEN DOORS.

OPEN DOORS is an “arts-and-justice alliance of artists, activists and advocates” that operates out of the Coler Nursing Home, a long-term care facility that houses a number of gun violence survivors dealing with spinal cord injuries. Through art and storytelling projects, these men work to warn others of the dangers of street violence while exposing injustices that breed violence in cities and prevent some survivors from stepping into full, purposeful lives.

As a volunteer and now credit intern with OPEN DOORS, Alex has been able to work on projects that combine his ILR education with his passion for helping others. In addition to organizing open-mic nights and producing a digital anthology of art, Alex has been working on the documentary “Fire Through Dry Grass,” about New York City’s decision to place COVID-19 positive patients in Coler Hospital, where many of the OPEN DOORS members reside.

In fact, his original music is featured in the trailer he spent hours transcribing footage and doing research for the film. “That’s something I am proud of,” said Alex, who began at OPEN DOORS with support from a Serve in Place grant with the Cornell Office of Engagement Initiatives and has continued as a credit intern.

“I’m an artist at heart, “but If it weren’t for ILR I would not have gotten here, I wouldn’t be with OPEN DOORS.”

ILR has helped me add structure to my thoughts, ILR is helping me organize my thoughts because I have a lot of ideas and they’re just everywhere. ILR has gotten me to think about work and workers’ rights, especially, ILR has made me a more informed worker, I don’t have employees yet, but I want to be an entrepreneur and ILR has already helped contextualize my entrepreneurship aspirations.

My impact at ILR is really on the other individuals. I see people who try to chase every leadership position and really want to run things and it's like you can make an impact doing small things, too. That's what I try to do, I really try to brighten peoples’ day and make my friends laugh.

I hope that ILR will shape the next 75 in a similar way they shaped the last 75, through education. I want ILR to inspire labor rights literacy so that more people know their rights. For example, my sister has had issues with her employer and even though she’s older, I’m the one telling her how to exercise her rights. If you’re not willing to consider the fact that you might need to use your rights, then you don’t have them. These laws are written and that’s why it’s important to learn about them. I wish more people knew what we do, people should know their rights and that is what I think ILR is all about.