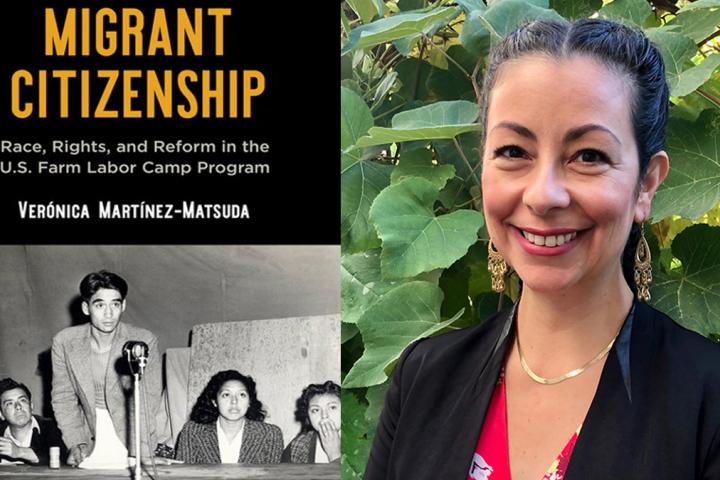 The award, announced April 21, is given annually for the best book on a topic in American labor and working-class history and is co-sponsored by the Labor and Working-Class History Association.

The book by Martínez-Matsuda is described by the historians’ organization as “a stunningly original study of the history of working people … that offers intimate stories of life inside farm labor camps that spread across the United States.”

Published by the University of Pennsylvania Press, the book blends labor, cultural and political history and describes, the historians’ association says, “how race and nationality shaped activism and aspirations and uses gender in provocative ways while underscoring the centrality of the family economy. We see workers as intellectuals and community leaders, learning how they conceived governance and rights. “

“I was very pleased to be honored this way. The prize is named for a scholar and activist I truly, truly admire. I never met him, but David Montgomery mentored Ileen DeVault, who has mentored me, so his legacy lives on,” Martínez-Matsuda said.

In an interview while the book was being written, Martínez-Matsuda said the camps united progressive federal officials and migrants “in an effort to combat the discrimination migrants encountered and the exploitive forces of corporate agribusiness at the height of its expansion, but the camp program also reinforced racial, gendered and class-biased division in agribusiness and society.”

While the camps introduced a more dignified way of living and working for migrants, they were often treated as ignorant by camp program administrators, who could be paternalistic and discriminatory.

The miniature societies “ironically contributed to biased discourses and practices that justified migrants’ inequity and disenfranchisement,” she said. For instance, the Farm Security Administration’s health education program was effective, but it promoted racialized views of culture and poverty.

“The federal government intervened dramatically on behalf of migrant families to promote the principles of American democracy, expand migrants’ civil rights, and make farmworkers visible beyond their role as temporary laborers,” she writes in her outline.

“What we think of as impossible occurred against all odds.”

“In labor camps across the United States, migrant families successfully worked with federal officials to disrupt the invisibility and marginalization historically shaping farmworkers’ experience. This remarkable story, previously unrecorded, offers an important precedent for those seeking to combat the precarity in farm labor relations today.”

The camps offered migrant families stability, but were a short-lived experiment; migrant farmworkers in the United States still do not have full labor or civil rights, said Martínez-Matsuda, who grew up translating for her parents, who moved from Mexico to Los Angeles in the early 1970s.