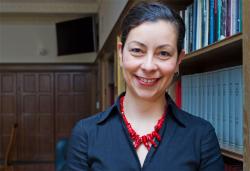 Professor Martínez-Matsuda is an Associate Professor at Cornell University’s ILR School, where she teaches courses on Immigration, Latinx Studies, and American Labor and Working-Class History. She received her Ph.D. in U.S. History from The University of Texas at Austin. Her most recent article, “For Labor and Democracy: Competing Visions of Migrant Farmwork, Social Reform, and American Civil Rights in the 1940s,” appeared in The Journal of American History (Sept. 2019) and was awarded the 2020 Organization of American Historians’ Binkley-Stephenson Award for the best article in the JAH during the preceding calendar year. Martínez-Matsuda is also the author of Migrant Citizenship: Race, Rights, and Reform in the U.S. Farm Labor Camp Program (University of Pennsylvania Press, 2020), which was awarded the Organization of American Historians’ (with co-sponsorship by the Labor and Working-Class History Association) 2021 David Montgomery Award for the best book in Labor and Working-Class History. Her research has received funding from the Ford Foundation, the Smithsonian, and the Woodrow Wilson National Fellowship Foundation, among other institutions.

Dr. Martínez-Matsuda's research agenda is motivated by the following central questions: How do those excluded from the legal and everyday rights of American citizenship because of their political status, racial identity, or class standing as low-wage workers, express civic membership and claim national belonging? And, in their actions to envision, articulate, and secure their civil rights, how do these marginal actors shape the political and sociocultural meaning of American citizenship? While her expertise in Chicanx Studies continues to ground most of her research, Martínez-Matsuda's work engages in a broader race-relational methodology and cross-regional framework. She is concerned with how agricultural workers’ experiences of disenfranchisement have varied and yet informed one another across different historical junctures, places, and relative to their specific circumstances of noncitizenship, racial subjugation, and economic exploitation. Her current research, Farmworkers' Sweat Equity: The Self-Help Housing Movement and Investment Against Migrant Poverty, further advances our understanding of how, for farmworker families, housing rights were intimately tied to the civil rights fight for decent wages, human dignity, and full citizenship. This book will explore the history of a rural cooperative housing movement for farmworker families and other rural poor citizens in the United States beginning in the early 1960s.