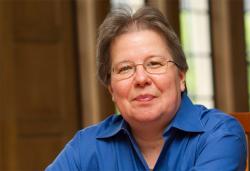 Ileen DeVault is Professor of Labor History at Cornell University’s ILR School in Ithaca, NY. She teaches classes on labor and working-class history. She is the author of two books, "Sons and Daughters of Labor" and "United Apart: Gender and the Rise of Craft Unionism," as well as many articles. Her current research involves examining the impact of workers’ family status on their workplace and union experiences between 1880 and 1930 and in the present. As part of this, she is working on a book manuscript which illustrates the complex ways in which the meanings of "family" changed as capital and workers came together in the logging industry of the Pacific Northwest.

Most of my teaching is in the field of labor and working class history. I am interested in communicating to students the ways in which people's lives in the past were both the same as and different from our lives today. I also hope to convey an appreciation for the process of historical research.

My overall research focus is on the interactions among gender, family, workplace, and community in US history. I look at the many manifestations of "family" and their impact for different groups of workers between 1880 and 1930, as well as in the present. I am currently working on a book on the logging industry in the Pacific Northwest from the 1910s through the 1930s.

I serve on several ILR committees as well as serving as a core faculty member of the Feminist, Gender, and Sexuality Studies Program. I am a member of the graduate fields of ILR, History, FGSS, and LGBT Studies.

Selected Works is a service of BePress Publishing that helps readers follow a scholar's most current work. View Selected Works of Ileen Devault