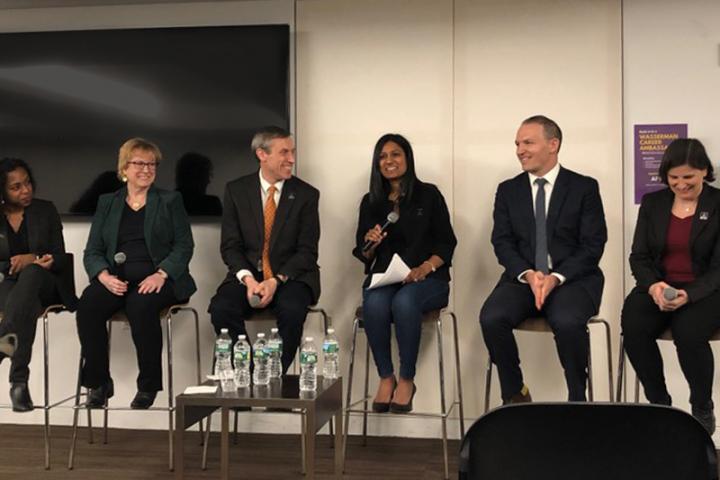 Workers are increasingly finding themselves on the losing end of a lopsided resolution process that employers have long controlled, ILR School Interim Dean Alex Colvin, Ph.D.’99, said at a panel in New York City on Wednesday.

More than half of private sector, non-union workers in the U.S. are required to sign arbitration agreements, up from 6-7 percent in the 1990s, and from 20 percent in the early 2000s, he said at “Arbitration in America,” a discussion organized by Google workers concerned about their company’s forced arbitration policy.

While arbitration has worked for unionized workers who have used collective heft to negotiate with employers, non-union workers have been relegated to forced arbitration agreements that strip their rights, panelists said. Among the biggest problems for these workers is not knowing the background of the arbitrator and whether that person has any legal experience.

“Right now, there are no regulations on who can be an arbitrator,” said Colvin, ILR’s Martin F. Scheinman Professor on Conflict Resolution. “You don’t let just anybody say they are a lawyer or doctor. [Arbitrators] are people making very important decisions. We need to think about who these individuals are and regulate [them.]”

Employer arbitration agreements can forbid workers from seeking redress in the courts where they are more likely to win in a dispute, and “the danger is that you can be in front of somebody who is not as neutral as you would like,” Colvin says.

Workers bound by forced arbitration forfeit their right to a jury trial and the appeals process, as well as discovery, where they can learn facts before a hearing, said panelist Katherine Stone, a UCLA Law School professor.

“You may give up your right to punitive damages depending on what’s in the clause or what the arbitrator feels is appropriate,” Stone said. “Some arbitrators actually have long-standing ties to the companies for whom they arbitrate and get their bread and butter from those ties.”

In her forceful dissent of a 5-4 Supreme Court ruling last year that allowed employers to require individual arbitration and to prevent their workers from filing class-action lawsuits, Justice Ruth Bader Ginsburg cited Colvin’s research on the negative impact of forced arbitration.

In an ideal world, workers in the U.S. would have access to a public arbitration system that is not forced, but that also maintains arbitration as a low-cost alternative to the courts, Colvin said in response to an audience member’s question. Countries such as Canada and Australia already provide this type of system.

The panel’s moderator, Tanuja Gupta, is a Google employee who helped organize a walkout of 20,000 fellow employees last year to protest forced arbitration. A week later, the tech giant ended that process for resolving sexual harassment cases. Gupta’s group, Googlers for Ending Forced Arbitration, drew widespread praise for how to fight back on behalf of workers.

But, Colvin also said, it is vital to recognize the importance of the courts as a way to create widespread, positive change for serious wrongdoing that arbitration can’t fix.

“There are really egregious cases of sexual harassment and other civil rights violations out there and the fact that in the U.S. you get $10, $20, $30 million dollar damage rewards really does [have] a disciplinary effect on employers,” he said. “You get better employer practices because of that.”

Peter Ortiz is a freelancer based in Newark, N.J.