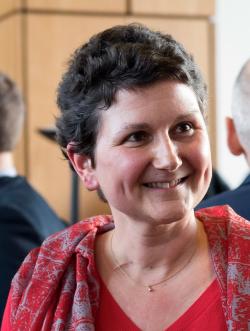 Elodie Béthoux is an Associate Professor of Sociology at Ecole normale supérieure Paris-Saclay. She is a member of IDHES (Institutions et Dynamiques Historiques de l’Economie et de la Société) and a collaborator of the Interuniversity Research Centre on Globalization and Work (CRIMT). She is the co-director of Graduate Studies in Sociology at Université Paris-Saclay. She co-chaired the Research Committee on Industrial Relations and Trade Unionism of the Association internationale des sociologues de langue française (AISLF) between 2008 and 2012. She holds a PhD in sociology from Université Paris Nanterre (2006). Her research examines social dialogue practices at the company level in challenging institutional and economic contexts. She first conducted research on EWCs and CSR practices in multinational companies and then studied company-level restructuring in France with a particular interest in workplace debates over employment issues. She was recently involved in a project on organizing R&D workers, studying the dynamics of change in union activities in a large French privatized research facility.  In 2013 she co-authored a book on the French CFE-CGC union (Sociologie d’un syndicalisme catégoriel. La CFE-CGC ou la fin d’une exception ? Paris, Armand Colin). Her last article, “A Primordial Attachment to the Nation? French and Irish Workers and Trade Unions in Past EU Referendum Debates” (with Roland Erne & Darragh Golden), is published in the British Journal of Industrial Relations.

At the ILR School at Cornell, Elodie will work on two comparative research projects. The first project is based on focus-group interviews with HR managers, unionists, and experts: it questions negotiating skills in light of the recent transformations of collective bargaining in France and in Quebec. The second project examines the role of company-level collective bargaining in creating, maintaining, or reducing inequality at work through an international cross-comparison of four countries (Australia, Canada, Denmark, and France).