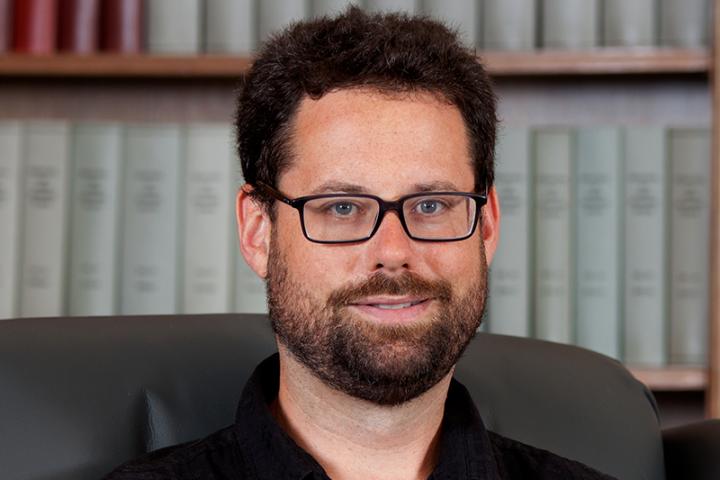 Ian Greer, an ILR senior research associate who earned his graduate degrees at the school, became the first director of the new ILR Ithaca Co-Lab this past summer.

Modeled after the ILR Buffalo Co-Lab, the ILR Ithaca Co-Lab mobilizes ILR students and researchers to address labor issues relevant to the Ithaca area. Created to strengthen the bond between ILR and Ithaca, the co-lab is just one example of how Greer has served the Ithaca community.

Greer first came to ILR as a graduate student in 2001. He was motivated to study the labor movement due to his own experiences as a worker and union member. During his time as a student, Greer studied union strategies in the United States and in Germany. Working with Professor Emeritus Lowell Turner and the director of the ILR Buffalo Co-Lab, Lou Jean Fleron, Greer was connected with activists and learned to connect workers and organizations across borders. After spending 10 years teaching in London, Greer returned to ILR as a senior researcher in 2015.

Since then, Greer has been dedicated to connecting ILR’s scholarship with the community. The Ithaca Co-Lab, he said, is a summation of these ongoing projects, directing ILR’s resources to “tackle the challenges of fighting unemployment, winning a living wage and organizing for worker voice.” Many in Ithaca are experiencing an employment crisis, making this work more important than ever.

One element of the co-lab is Greer’s partnership with the Tompkins County Living Wage Working Group. Chaired by Tompkins County Legislator Anna Kelles and Pete Meyers of the Tompkins County Workers Center, joined by community activists, trade unionists, social service agencies, elected officials and employers, the group is working toward understanding the potential effects of Tompkins County raising the county minimum wage to a living wage, a figure that the Alternative Federal Credit Union calculated in 2019 to be $15.37 per hour.

Andrew Kohler ‘20, who worked with Greer as a research assistant on the living wage project, went door to door with Greer to see what workers and community members think about the living wage. They also held open-ended interviews with employers in the community, seeking to understand how a minimum living wage would affect their businesses. In 2021, Greer will follow up with these employers to understand the effects of the state minimum wage increases.

Greer has led research to better understand Ithaca’s labor market as it stands now. With funding from the Partnership for the Public Good and the help of Rusty Weaver, a quantitative geographer who is based in the ILR Buffalo Co-Lab, Greer found that nearly three-fourths of Black workers in Tompkins County make less than the living wage.

Greer and Weaver are also studying how an increase in Tompkins County’s minimum wage would affect the benefits that many low-wage workers who rely on, such as Medicaid and food stamps. “Do these people lose out on net income, and if so, by how much?” questions Greer.

The interviews that Greer has completed, alongside the analytical work that he has done with Weaver, will be presented to the Living Wage Working Group. These results are expected to inform how the Tompkins County Legislature acts if they choose to implement a living wage and, if so, how the living wage will function, Greer said.

Greer, whose 2020-21 Engaged Faculty Fellow project is focused on the co-lab, also creates community impacts through his teaching. Through the unemployment course that he teaches as part of the co-lab, Greer creates opportunities for students to do community-engaged learning alongside community organization addressing labor issues in the Ithaca region. In addition to learning about social problems in theory, Greer’s students are tasked with creating work that is directly useful to the community.

Students in Greer’s unemployment course are partnered with a number of organizations. Many have worked for Legal Assistance of Western New York. The organization offers upstate New Yorkers free legal services on civil legal issues. With support from Cornell’s Office of Engagement Initiatives, students have done a number of projects alongside the group, including representing clients through the process of appealing the denial of their unemployment benefits and research on legal procedures to help people with criminal records obtain employment.

An additional organization that Greer’s students support is Ithaca’s Women’s Opportunity Center. Dawn Cornell, ‘16, MILR ‘21, served on the center’s board before taking Greer’s course last spring. When the pandemic hit during the middle of the semester, Cornell worked with the center to hold a webinar on how to navigate the unemployment system. “I was able to take what I learned in class and help members of our own community,” Cornell said. Cornell reached not only the center’s clientele, which is largely made up of low-income women, but representatives from displaced workers’ organizations from across New York state, who were then able to take what they learned and share it with their clients.

“It was a really great experience,” Cornell said. “I was able to, in real time, take all of this complex information, synthesize it and share it with the community.” Cornell credits this impact to Greer. The webinar she created was not originally part of her coursework, but when Cornell began to see the effects of COVID-19 on employment, she approached Greer and explained her idea. He was immediately supportive, she said. “His eagerness to improve the lives of people in the community through the work done at Cornell is really tremendous.”

This semester, students in Greer’s unemployment course are continuing to tackle local labor issues. Not only has unemployment swept through Ithaca, inducing potentially permanent changes in employer skill requirements, there is an increased demand to address racial inequities in the local labor market and a push to get serious about green jobs and a just transition to a green economy. Greer’s students are working within this context to assist the new director of the Tompkins County Workforce Development Board, Natalie Branosky. Students are researching and developing a new plan for funding and managing the services that help meet labor supply with the demands of local employers.

Greer’s projects include working with Chris Kai-Jones of the Cornell Cooperative Extension to research how Cornell can better use its financial might to promote economic opportunities and lock in resources for the local area. With the financial support of the Office of Engagement Initiatives, Greer and Kai-Jones are researching ways Cornell can address disadvantages in the labor market, recruit disadvantaged job seekers and purchase more local food for campus dining halls.

Greer is using the dialogue to pull local leaders into an international conversation that “inspires and stimulates work.” Topics for this year’s conference are focused on the specific challenges that the COVID-19 crisis has created. In addition to those, Greer has redirected some of the Transatlantic Dialogue resources toward the Ithaca community. For example, this past June, Greer worked with the Tompkins County Workers Center to organize a webinar with Darlene Lombos, the director of the Greater Boston Labor Council, and local leaders on the connection between worker power and mutual aid.

Greer’s work has directed more ILR resources toward the Ithaca community and provided more community-engaged learning opportunities for students.“The thing about engaged learning,” Greer said, “is that there are big challenges that we’re trying to find solutions to and these aren’t problems that you can solve in a semester.