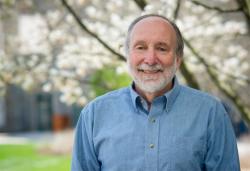 Lowell Turner is Professor Emeritus of International and Comparative Labor at Cornell University, in the School of Industrial and Labor Relations. He is the author of Democracy at Work and Fighting for Partnership (both published by Cornell University Press), and the editor or co-editor of Negotiating the New Germany, Rekindling the Movement, Labor in the New Urban Battlegrounds, and Mobilizing against Inequality (all published by ILR Press/Cornell University Press). In June, 2011, he was appointed as the founding academic director of the new Worker Institute at Cornell.

We have fine students at ILR and I love teaching at all levels: undergraduate, MILR and MS/PhD. For undergraduates, I teach a large elective course with themes that change from year to year as the world changes. Our current focus is on the politics of economic inequality in the US and Europe. I take it as a challenge to maintain interest with up to 220 students each time the course is offered (once a year), mixing lecture, slides, video clips, guest speakers, and occasional movies - and I enjoy mentoring the 3 or 4 teaching assistants that work with me each time. I also work with 3 or 4 Worker Institute undergraduate research fellows, each semester since the start of the program in spring 2014, and it is a particular pleasure to see them developing research skills in ongoing projects.
For graduate students I teach a lively, discussion-oriented seminar, on topics similar to the current issues focus of the undergraduate course. I coordinate the Collective Representation concentration for the MILR program and work closely with the small but enthusiastic cohort of graduate students focused on labor and social justice. I also supervise honor's students, ILR interns at home and abroad, global scholars, and MS/PhD students, taking particular pleasure from watching an idea grow into a substantial paper or thesis.

My current central focus in on a four-year, five-country study of Young Workers and the Labor Movement - in Germany, France, the Netherlands, UK and US. It has been gratifying to watch Maite Tapia, a former ILR PhD student and current assistant professor at Michigan State, blossom into a full co-director of this project. Together we have developed the research proposal, selected the participants, secured the grant (300,000 euros from the Hans Boeckler Foundation), and now coordinate the work of five country teams of researchers. We are now in the third year, completing in-depth case studies for all five countries. A lively workshop in Paris in September 2015 brought together all project researchers to launch the study. A second workshop is now being planned for May 2017 in Amsterdam, where research findings and analysis will be presented and discussed - in preparation for a book manuscript and publication.
Past research has focused on Immigrant workers and unions in Germany, France, Britain and the U.S., resulting in an ILR Press book published in April 2014, with an accompanying interactive website to update research and dialogue on this topic among a wide range of scholars and practitioners.
Earlier research focused on various aspects of comparative labor movements, social partnership in Germany, the impacts on labor of German unification, labor movement revitalization at home and abroad, and contemporary labor and politics in the U.S. and Europe.

The Worker Institute integrates academic work with public service. Much of my work as founding academic director from 2011-2016 involved facilitating innovation and expansion of public service activities. These include the National Labor Leadership Initiative, Union Communications Service, and much more. After 5 years I passed the academic director baton on to talented colleague Ileen DeVault, but I continue to serve on the WI executive committee. I also participate in various Institute projects, including mentoring Worker Institute student fellows. My current four-year, five-country research project on young workers and the labor movement aims not only at contributions to theory but also at practical recommendations for unions and other organizations that advocate for workers. With several colleagues and student fellows, I coordinate a Worker Institute-linked website on immigrant workers and the labor movement, with a current research focus on the defense and integration of immigrant workers, with and without official documentation.
In the past I have chaired the ICL Department as well as numerous ILR standing committees and promotion committees.

As founding director of the Worker Institute, one of my main goals has been to bring together resident and extension faculty, staff, students and practitioners in common efforts - both in outreach and on the Ithaca campus. 20 ILR resident faculty members are now actively involved in one or more WI project, greatly expanding our outreach capacity as well as our offerings on the Ithaca campus. Added to this are the 25+ students per semester who participate in our Worker Institute research fellows program, working with both resident and extension faculty. Outreach efforts range from the projects of our initiative groups such as Precarious Work, Equity at Work, and Climate Jobs to our path-breaking National Labor Leadership Initiative in partnership with the AFL-CIO. Our flagship Union Leadership Institute in now in its 16th year and has trained over 300 current union leaders in New York State and surrounding areas. Union Communication Services, gifted to us three years ago by founder David Prosten, is a widely used publication and newsletter service that each week reaches 70,000 shop stewards and local union officials all over the country.

Selected Works is a service of BePress Publishing that helps readers follow a scholar's most current work. View Selected Works of Lowell Turner