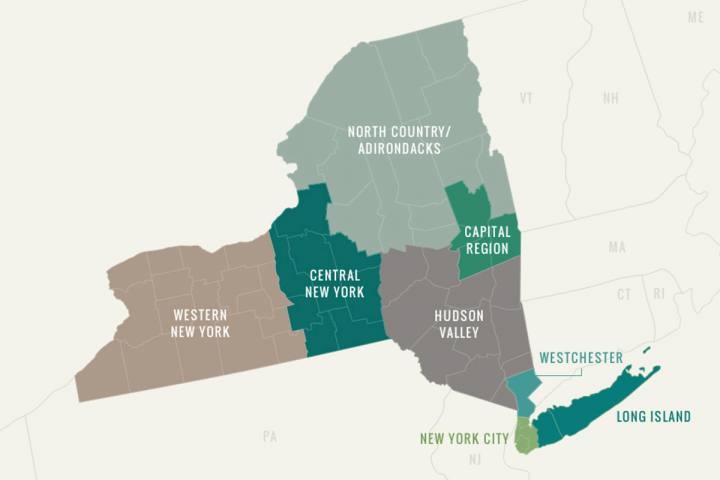 More precise figures on how much civilian labor forces have contracted in New York state since March will be released today in a report from the U.S. Bureau of Labor Statistics. The “Metropolitan Area Employment and Unemployment Data for April 2020” will provide statewide and regional information.

Last week, the agency and the New York State Department of Labor reported that New York’s seasonally-adjusted April 2020 unemployment rate is 14.5% – an historical high just two months after the state recorded its historically low rate of 3.7% in February. That rate is close to the national level of 14.7%, and slightly below estimates (including Cornell ILR Buffalo Co-Lab’s estimates) of 15%-16% derived from forecasts and raw U.S. Census Current Population Survey (CPS) data for April 2020.

Does this mean that unemployment is slightly less of an issue in New York state compared to the U.S. as a whole?

Absolutely not. For one thing, a 14.5% unemployment rate is still devastating, and a far cry from the sub-4% levels pre-COVID-19. Secondly, and more importantly, the Bureau of Labor Statistics state-level estimates are always flagged as “preliminary” when they are first released – meaning that they will be revised at a later date and may increase as results trickle in from additional surveys. Judging by how unemployment insurance claims in New York have continued to fluctuate up and down while, nationally, claims have fallen for eight consecutive weeks, there is ample reason to believe that New York’s unemployment situation is more extreme than the U.S. average. Indeed, last week’s reports even showed that, on a percentage/relative basis, New York’s month-over-month and year-over-year job losses were both among the top three highest values observed nationally.

At bottom, the official (preliminary) April 2020 unemployment rate for New York State is not as high as many of us were anticipating – a positive outcome, to be sure. However, between the preliminary status of those estimates, trends in UI claims, and other corroborating data, the final analysis is likely to show that New York has been one of the hardest hit states by COVID-19 to date.

Which areas of New York state have been hit hardest?

While the total impacts of COVID-19 on jobs and the economy are increasing each day, the tally so far includes the following bottom-line data points: