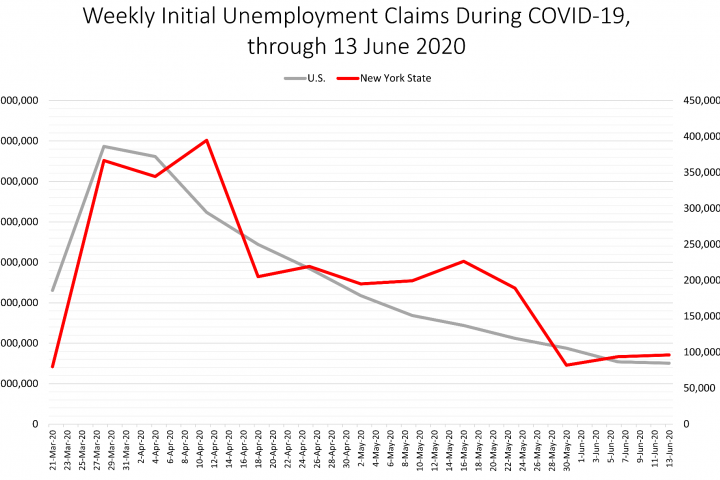 This excerpt is from Cornell's High Road Policy blog.

Since the start of the COVID-19 pandemic, the number of weekly unemployment insurance (UI) claims has been one of the most closely monitored and widely cited data points in the United States, arguably behind only coronavirus cases and COVID-related deaths. During the first week after mass shutdowns and statewide stay-at-home orders were issued, more than 3.3 million Americans filed UI claims – a record-shattering figure, and a 1,072% increase relative to the prior week. One week later, UI claims nearly doubled, reaching an historic peak of nearly 6.9 million across the nation.

Ever since that peak, the number of weekly claims in the U.S. has been trending downward. According to today’s release from the U.S. Department of Labor (DOL), claims have now fallen for eleven consecutive weeks. Yet, while sustained week-over-week decreases are unquestionably positive signs, the numbers are still staggering. Across the country, another 1.5 million workers filed UI claims for the week ending 13 June 2020. That’s a considerable drop off from 6.9 million weekly claims, though it is still more than five times higher than the 282,000 claims made during the week prior to onset of the economic shutdown (week ending 14 March 2020)!