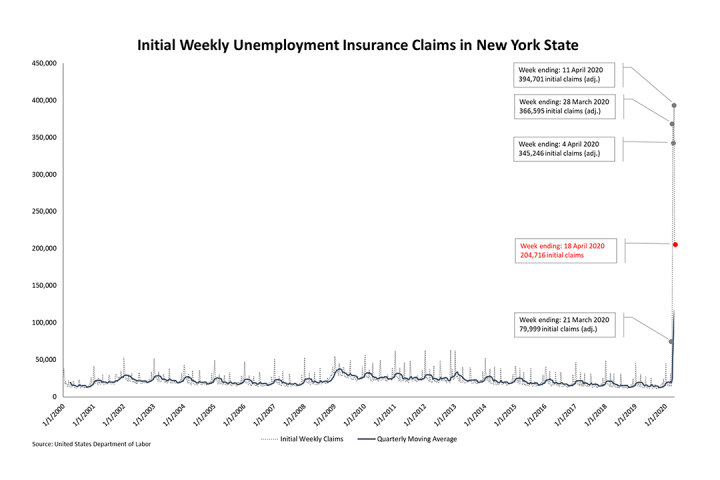 Since recording a record-shattering 6.8 million unemployment insurance (UI) claims during the week ending 28 March 2020, the United States has had three straight weeks of drops in initial weekly UI claims.

However, as we reported last week, while that sizeable decrease is a step in the right direction, it does not mean that economic recovery is yet in view. The 4.4 million total UI claims from the latest DOL release still represents a 1,470% increase over the 282,000 claims that were made in the week before claims began to experience coronavirus-related spikes (the week ending 14 March 2020). The magnitude of the crisis therefore remains alarmingly high, and every effort must continue to be made to support affected workers.

The same holds for New York State. New York experienced its peak level of UI claims (to date) during the week ending 11 April 2020, two weeks after the US hit its national peak. Notably, though, UI claims dropped by 48% following that high point – to 204,716 claims for the week ending 18 April 2020 – suggesting that the New York is beginning to track with national trends. Still, the nearly 205,000 claims that were reported in yesterday’s data release are far from typical. Just 14,272 claims were made in the week ending 14 March 2020, prior to the onset of widespread COVID-related shutdowns and layoffs.

The hardest-hit industries in New York continue to be accommodation and food services, retail trade, health care and social assistance, construction/utilities, and other service-sector jobs. In the near term, examples from other countries show that, even after economies are “reopened”, these industries will continue to be impacted. As just one example, new protocols in restaurants to keep customers spatially separated are limiting the number of patrons that can be accommodated at one time, depressing the need for pre-pandemic staffing levels. For at least one Hefei-based restaurant (Anhui, China) recently interviewed by the New York Times, two-thirds of pre-coronavirus employees remain unemployed – a month after reopening – due to lower patronage.

Put another way: simply lifting social-distancing restrictions and declaring economies to be reopened is not going to solve the problem of historic UI claim levels. Rather, it is necessary for economic reopening strategies to be guided by science and grounded in values of empathy and solidarity. In the end, overcoming the COVID-19 crisis will demand measured approaches to reopening economies coupled with strong, equitable, well-funded, and comprehensive programs of social, business, and worker assistance.