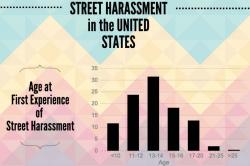 Eighty-five percent of women in the United States experience street harassment before the age of 17, according to research by ILR and Hollaback!, a non-profit organization.

ILR Professor Beth Livingston directed the research and was assisted by Maria Grillo MILR ’15 and Rebecca Paluch M.S./Ph.D. ’18. Data from more than 16,600 women in 42 cities globally is slated to be released in May.

Livingston said, “Creating a survey to be consistent across multiple countries is a complicated undertaking, but it provides an amazing opportunity to understand street harassment cross-culturally.”

The survey was conducted between Oct. 15 and Dec. 15. It was translated into English, Spanish, French, Italian, Dutch, Bosnian, Croatian, Hindi, Polish, Nepali, Marathi and German.

Survey findings from the nearly 4,900 respondents who live in the U.S. showed:

Debjani Roy, deputy director of Hollaback! said in a statement, “We hear stories of street harassment every day and, even so, this data shocked us.”