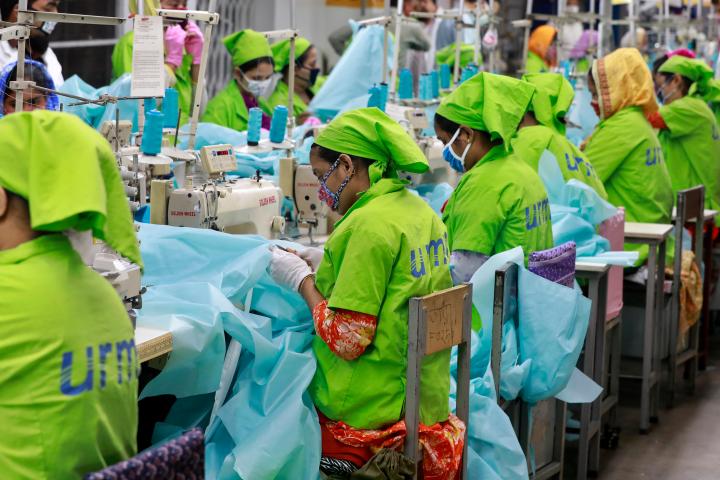 The ILR School’s New Conversations Project has produced the Social Dialogue in the 21st Century Project, a series of 10 papers that provides a root-cause analysis of barriers to impactful negotiations between various actors in the supply chain of the project's 10 target countries: Bangladesh, Bulgaria, Ethiopia, India, Myanmar, Cambodia, Indonesia, Mexico, Honduras and Vietnam.

The project with the Strategic Partnership for Garment Supply Chain Transformation – a Dutch-government-funded collaboration – resulted in a Synthesis Report summarizing the findings of a year-long mapping exercise across the 10 countries, as well as country-specific reports.

“The goal was to figure out in social dialogue in apparel now, who’s in, who’s out, who’s missing and what’s going on inside,” said Jason Judd, director of the New Conversations Project and a co-author of the Synthesis Report with Lowell Jackson and Anna Burger. “The social dialogue system that was put in place 100 years ago just doesn’t suit anymore. It doesn’t take account of the huge power imbalances between global brands and their local suppliers or the distance that is both literal and figurative between brands and the workers that make their products.”

The project’s research looked beyond the traditional social partners – groups that cooperate in working relationships to achieve agreed upon goals – in order to map the interests and roles of the complex network of actors in supply chains. Actors include factory-level, national and global unions, employer organizations, local civil society organizations, government agencies and regulators in the world’s main apparel-producing and consuming countries.

The research also takes into account issues such as legal frameworks, the habits of social dialogue and democratic interaction, the structures of work organization, the degrees of coordination among suppliers, unions, governments and other actors, as well as the impacts of the pandemic -- a high-stakes “stress test” - on social dialogue structures and habits in the global apparel industry.

According to Judd, the project failed to find a “pattern” across all 10 countries, but did find that the barriers to social dialogue were “abundant, immense and constantly fluctuating.” And these barriers were exacerbated by pandemic, which led to mass layoffs in the garment industry.

At the 2020 Organisation for Economic Co-operation and Development forum on due diligence in the garment and footwear sector, Judd presented the workshop “Is social dialogue part of the COVID cure?” based on the report’s findings.

In their target countries, the researchers found that national-level social dialogue presented in one of three ways:

“Even where national-level social dialogue has been functional, we found that it has failed to ensure adequate oversight of factory-level management of the impacts of COVID-19, particularly with regard to worker dismissals, worker furloughs, and temporary shutdowns,” Judd said. “Across our target countries, we found violations of agreements and health provisions at the sectoral and factory levels. This impunity for employers has been aggravated where governments have placed restrictions on freedom of assembly, severely restricting workers’ ability to mobilize, protest, and strike. With the combination of low union density, lack of effective dialogue and conflict resolution mechanisms at the enterprise level, many workers have turned to protests for recourse.”

Judd cited recent examples of workers in India engaging in country-wide protests in May and July 2020, while other worker protests have taken place in Bangladesh, Cambodia and Myanmar.

In response to these protests, many governments have cracked down on public assembly. In Myanmar, for example, the government introduced the “Prevention and Control of Communicable Diseases Law,” which banned gatherings of five or more people, restricting workers’ abilities to legally protest. In Cambodia, a state of emergency law implemented in April 2020, allows the government to curtail freedom of assembly in the name of a “more civilized society.”

“Effective social dialogue cannot be conjured,” Judd said. “It cannot happen in Mexico’s apparel industry, for example, which does not have a single independent union. It is not an end, but a means. It cannot substitute for the near absence, in Myanmar and Bangladesh, of social insurance schemes. And, it cannot deliver where there are vast power imbalances that—coupled with the pandemic’s urgency – have foreclosed on meaningful negotiation. It is still early to say if new modes of social dialogue are emerging out of the COVID-19 pandemic, but the profound impacts of the crisis and the uncertainty for global apparel producers means that new forms are needed.”