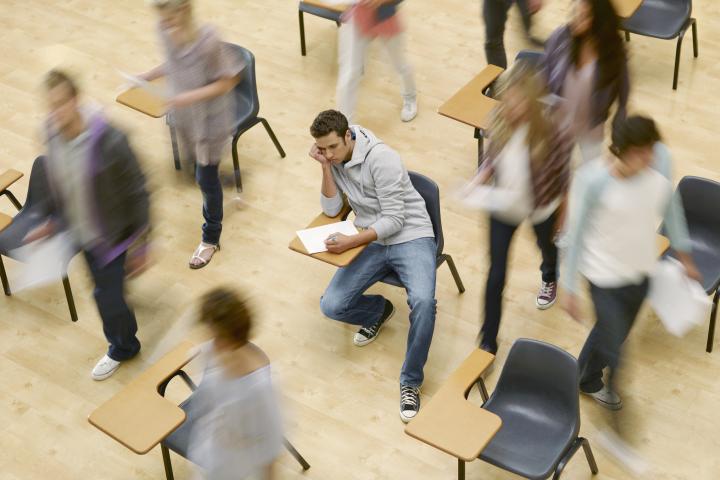 College students who are marginally placed into “high-ability” classes have lower grades and graduation rates, according to new research by ILR Assistant Professor Evan Riehl.

Riehl’s research examines students who barely qualified to take classes with high-achieving peers at a selective university. Placement in the high-ability classes reduced students’ grades in first-year courses by 0.2 GPA points – roughly the difference between B+ and B – and increased their likelihood of failing the course by five percentage points. In the long run, marginal students admitted to high-ability classes passed four fewer college courses on average, and they were nearly nine percentage points less likely to earn a degree.

Tracking – grouping students by ability into different classrooms, or different schools – is a common, but often contentious, practice at all levels of education. On both sides of the debate, however, it is typically assumed that, at a minimum, students placed into high-ability classrooms will be better off, either because they interact with higher-achieving peers or because they experience a more supportive learning environment. Riehl’s research suggests the opposite. It finds that students who barely miss out on placement in the high-ability cohort actually benefit from the fact that there better prepared academically than their peers in the lower-ability track.

“Tracking is pervasive in education at all levels,” Riehl said. “The debate typically centers on the lower-ability tracks --- some argue that students in these tracks are stigmatized, while others believe they benefit from less difficult material. On the other hand, people usually assume that it’s good for the students who are placed in the upper track because they are in a high-achieving environment. Our paper shows that, particularly at colleges where there are a lot of students who don’t graduate, it’s not always good to be in that upper track because then you’re less prepared than many of your classmates.”

In the paper, “Do college students benefit from placement into higher-achieving classes?,” published in June in the Journal of Public Economics, Riehl and his co-author, Nicolás de Roux of the Universidad de los Andes, examined an admission system at a prestigious Colombian university – Univalle – that tracked admitted students into high- and lower-ability classes in the same majors.

In a typical year, students apply to specific majors at Univalle in cohorts that begin in either the fall or the spring, and admission is based solely on scores from a national standardized exam. But, from 2000–2003, several of Univalle’s architecture, business and engineering programs used admission scores to track students into separate fall and spring cohorts. The 60 highest-scoring applicants were admitted to a fall cohort, and the next 60 applicants were admitted to a spring cohort of the same program. This tracking system allowed Riehl and de Roux to conduct their research.

“Our results are consistent with the idea that some degree of tracking is beneficial for students,” Riehl said.