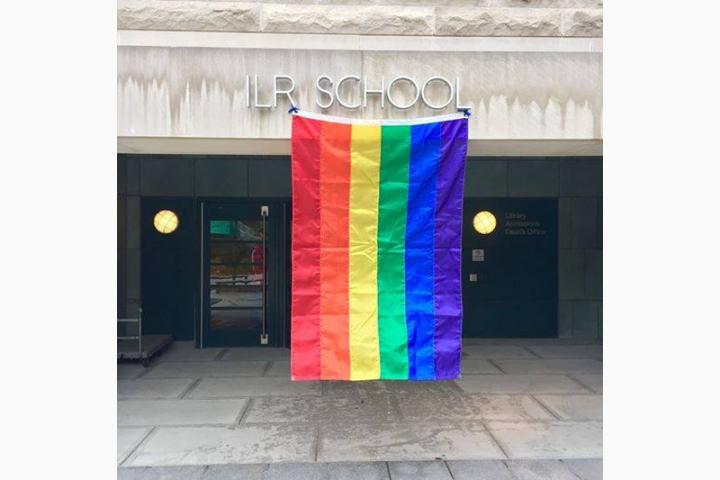 Bringing marginalized voices to the forefront was the focus of IvyQ 2015, held this year at Cornell and sponsored in part by the Scheinman Institute on Conflict Resolution and the ILR School.

The conference  is held annually at an Ivy League school for the LGBTQ+ community.

This year was the first time that it was held in Ithaca. About 400 students from Ivy League institutions and other universities attended conference events in Ives Hall and other campus locations Friday and Saturday.

“ILR and the Scheinman Institute  have been more than gracious with helping to fund the conference, find speakers and provide us with rooms,” Brumm said.

“The Scheinman Institute not only helped us with fundraising for the conference, but helped provide ideas about what to include in the conference.”

Brumm credited Katrina Nobles for helping IvyQ connect organizers with Ithacans, Cornell alums and others who could contribute to its success.

Nobles, education and communications manager for the Scheinman, said that the institute has launched a strategic initiative focused on diversity and inclusion with special emphasis on LGBTQ issues.

“Conflict often arises out of intersectionality, or overlapping social identities and related systems of oppression, domination or discrimination. The students did a phenomenal job of bringing intersectionality into this conference, and we were honored to be a part of it,” Nobles said

“When we bid in the fall of 2014, it wasn't just only after Trayvon Martin’s death, Michael Brown’s death and Eric Garner’s death. It was after 81 transgender individuals had been murdered for their gender expression, many of them transgender women of color.”

“There was this necessity to talk about these things and we really wanted to create a forum for these voices to be heard in a way that was not the traditional way to think about them,” she said.

“A lot of the time, people separate Black Lives Matter issues from queer issues,” Fernández said. “Kyle and I were really set on making sure there was intersection between the two.”

According to Brumm, “We had Log Cabin Republicans come, which is not the first thing that you think of when at an LGBTQ conference. We thought it was an important message, along with having someone speak about being Muslim and LGBT.”