Steven Greenhouse, who chronicles in a new book the rise and decline of worker power and how it could be rekindled, speaks at ILR on Monday. 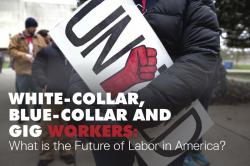 Longtime "New York Times" reporter Steven Greenhouse will speak Monday at ILR about the decline of unions and worker power, and about developments that could strengthen the labor movement.

“White Collar, Blue Collar and Gig Workers: What is the Future of Labor in America?” begins at 4:30 p.m. in 105 Ives Hall. It is free and open to the public.

“I plan to discuss some important developments that I've seen in writing my years writing about labor: how unions and worker power have declined and how that has hurt the nation and its workers, including millions of young workers.”

“I'll also discuss some very promising developments for unions and workers: the #RedforEd teachers’ strikes, the Fight for $15, the unionization of educated, white-collar workers like digital journalists and adjunct professors and the huge attention that the Democratic candidates are paying to helping workers and helping unions grow and become more powerful.”

Greenhouse has a long-standing relationship with ILR faculty and alumni.

“In my nearly two decades covering labor and workplace matters for ‘The New York Times,’ I repeatedly turned to professors at the Cornell ILR School for their expertise. I interviewed Richard Hurd, Kate Bronfenbrenner, Harry Katz, Rosemary Batt, Lois Gray, Lowell Turner and many others, including Dean Colvin. I was impressed by the range and depth of expertise at the ILR School. Over the years, I have interviewed many ILR graduates who had become professors, union organizers, mediators, labor lawyers, even union presidents.”

Greenhouse spoke in ILR classes -- in Ithaca and in New York City – when his first book, “The Big Squeeze: Tough Times for the American Worker,” was published in 2009.

Greenhouse’s new book, “Beaten Down, Worked Up: The Past, Present, and Future of American Labor,” was published in August.  “New York Times” opinion columnist Nicholas Kristof said “It surveys the history of the labor movement, but also offers a searing indictment of how labor’s decline magnified inequality and injustice in the U.S.”

The Monday lecture is part of ILR’s Inequality and Work theme project.