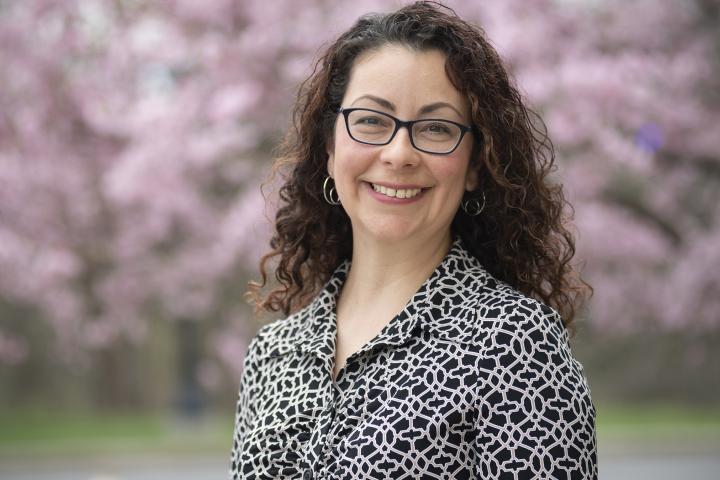 Verónica Martínez-Matsuda serves as an associate professor in the ILR School’s Department of Labor Relations, Law, and History. She earned her Ph.D. in U.S. History from The University of Texas at Austin where her dissertation, "Making the Modern Migrant,” was awarded the Barnes F. Lathrop Prize for Best Dissertation in the Department of History.

Martínez-Matsuda’s research focuses on farmworkers – specifically migrant workers who are excluded from the legal and everyday rights of American citizenship because of their political status, racial identity or class standing as low-wage workers.

Her book, “Migrant Citizenship: Race, Rights, and Reform in the U.S. Farm Labor Camp Program,” won the 2021 David Montgomery Award, and her upcoming book, “Farmworkers’ Sweat Equity,” will examine the history of a rural, cooperative, self-help housing movement for farmworker families and other rural poor citizens in the U.S. beginning in the early 1960s.

What is your research about?

My research has always been driven in part by my own family history. I am the youngest daughter of Mexican immigrants who arrived in Los Angeles undocumented in the early 1970s. Coming of age, I learned to appreciate the critical negotiations that immigrants engage in, especially in their role as low-wage workers, to establish their own claims to American citizenship. Although my parents worked in California’s urban factories (my father eventually found work as a cabinetmaker and my mother’s first job was as a seamstress in LA’s garment district), I chose to focus my research on farmworkers.

Historically, Congress’ deliberate exclusion of farmworkers from key national labor protections and social-welfare benefits ensured that they remained “alien” regardless of their actual legal status. In other words, because they lacked residency in any one state, and because of their racial and class standing, migrant farmworkers were regularly unable to access basic rights available to the majority of U.S. workers by the 1930s.

My first book, “Migrant Citizenship,” explores how farmworker families combated their subjugation and disenfranchisement by participating in a “democratic experiment” as part of a federal labor camp program during the 1930s and 1940s. My current book project, “Farmworkers’ Sweat Equity,” examines the history of a rural, cooperative, self-help housing movement for farmworker families and other rural poor citizens in the U.S. beginning in the early 1960s. The book explores how farmworkers joined with an organization called “International Self-Help Housing Associates” to address the so-called problem of “rural homelessness” and demand civic inclusion during the War on Poverty.

Given the events of the past year, where will your research have the most impact?

The most fundamental impact I hope my work will have is to remind us that those at the beginning of our food supply chain—people who do farm work, the majority of whom are BIPOC and immigrants—remain among the least protected workers in the country. The vulnerability and insecurity most of us have experienced during the COVID pandemic is something that agricultural workers have long had to endure. History shows us that farmworkers have always been at greater risk of exposure to dangerous diseases due to their poor and hazardous living and employment conditions. They are less likely to be able to afford to miss work when sick because they commonly earn below the minimum wage and are threatened with losing their jobs. And, because of their racial background and precarious legal status, farm-working families face additional barriers to receiving help when requesting medical services or public assistance.

My research shows that failing to provide farmworkers the broad legal protections and public benefits necessary to improve their labor and civil rights threatens the entire food industry and all of us who depend on the food they supply. While some improvements have been made to afford farmworkers greater justice, such as the recent passage of the NYS Farm Laborers Fair Labor Practices Act, over half of our country’s seasonal workers lack authorized immigration status. Without immigration reform that secures formal citizenship for farmworkers and their families, these workers remain deprived of full bargaining power to hold their employers accountable for continued labor violations. The persistent refusal to protect farmworkers as essential people—which can be seen at the moment in the refusal of various states to provide farmworkers the COVID vaccine—further reveals how necessary it is that we continue to fight for farmworker justice.

As ILR celebrates its 75th anniversary and looks to the next 75 years, how do you foresee your research contributing to the future of work, labor and employment?

I think we can learn from historical examples to advance our own actions toward greater social justice—i.e., to do better—and also to draw inspiration from and build on the important gains of those who struggled before us. Testifying before Congress in 1940, for instance, Frances Perkins (U.S. Secretary of Labor from 1933-1945 and ILR lecturer from 1957-1965) spoke powerfully about the need to cover excluded workers under the nation’s labor and social-security laws. She reminded Congress that “migrants do not live apart from our whole social and economic system. In the long run, the best assurance of a decent life for migrants is the continued improvement in the standard of living, and the opportunities for work, of all Americans.” (U.S. House of Representatives, 76th Congress, Hearings Before the Select Committee to Investigate the Interstate Migration of Destitute Citizens, Part 8, Testimony of Frances Perkins, 3336-3337. Washington D.C.) Although many of the abusive practices in farm labor have astonishingly not changed much since the ILR School was established, my research demonstrates why it is necessary to secure and enforce greater labor protections and civil rights for immigrant workers.