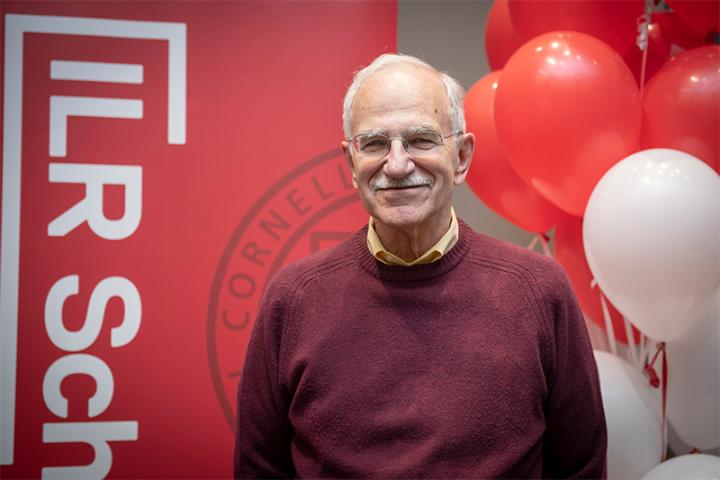 Professor Robert Hutchens noticed early on the potential of a particular student who would go on to have a brilliant career as an economist.

“In my classes, he stood out very quickly. He was a hard worker and wrote amazing final exams. I thought, ‘This kid is really special and has the potential to be something unusual.’ The only reason I knew more was because I was older.“

They stayed in touch for nearly 30 years and in 2012, Alan Krueger ’83 invited Hutchens to come for a tour and lunch at the White House, where he was serving as President Barack Obama’s chief economic adviser.

“It was wonderful to see him and have him interact with the students,” said Hutchens, accompanied on the visit by two students in the Cornell in Washington program, which he led from 2008 to 2016.

In a 2013 interview, Krueger, who died in 2019, recalled receiving sage advice from Hutchens as he tackled a paper about worker pay. "I remember he told me that I should only write on this topic if I was comfortable with shades of gray. In one way or another, I have spent most of the rest of my career grappling with this question."

Teaching ILR’s introductory labor economics class was fun, said Hutchens, who introduced the course by telling students that he hoped they would ultimately see that labor economics is interesting and useful, but also hard. He would then reference Meat Loaf’s song “Two Out Of Three Ain’t Bad.”

As the years went by, fewer and fewer understood the reference to the song, but thousands graduated with a grasp of basic labor market supply and demand.

“Students often have a negative attitude toward economics. It’s hard and it can be complicated. I tried to argue that, ‘look, what I want you to come out of this with is that this stuff is pretty interesting and applicable to the real world.’”

After surveying 950 firms through a Sloan Foundation grant, Hutchens found that most employers are open to phased retirement for older white-collar workers. However, employer stipulations around pay, health insurance and other benefits can discourage workers from choosing phased retirement.

Hutchens studied mandatory retirement; his papers tested whether wages outpaced productivity, and led to a stream of work on contractual and other employment relationships with older workers.

Hutchens, who began teaching at ILR in the fall of 1975 and taught his last class in the fall of 2021, said he learned a great deal by being surrounded by ILR colleagues from a variety of fields. They also learned a lot from him. Hutchens’s calm demeanor was held up as a standard for both faculty and students. “Be like Bob” was a refrain heard throughout Ives Hall.

Now, it is on to learning Spanish, teaching English as a second language and occasional fly fishing.