Alan Krueger ’83, whose research, teaching and public service shaped the way people think about a range of topics, was known for extraordinary contributions to modern economics. 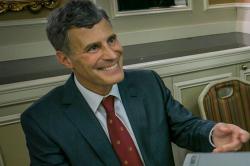 Alan Krueger ’83, one of the world’s most influential labor economists and a central figure in the rebuilding of the U.S. economy after the 2008 financial crash, was inspired as an ILR School undergraduate. Here, he learned to apply economics to solve problems people face in their daily lives.

Krueger, 58, died last weekend. A Princeton University professor, he served in the Clinton and Obama administrations and authored ground-breaking research that impacted millions.

Interim Dean Alex Colvin said ILR community members are remembering Krueger’s generosity of spirit and how the promise of his intelligence was evident from the start of his college career.

“His work is characterized by its importance for working people’s lives. It shows how economics is relevant to basic questions of how to improve people’s standard of living and their personal happiness.”

“The topic for the centerpiece of my Ph.D. thesis at Princeton, where Alan was a newly tenured professor, was suggested to me by him. A dizzying number of economists were inspired by him.”

“He cared deeply about human beings and it showed in his research, the policy questions he tackled and his impact on others,” Hallock said.

His research was also characterized by great breadth, Blau said. In addition to research on the effects of the minimum wage, “he pulled economics in new directions, studying the determinants of participation in terrorism, the factors that influence reported happiness, the employment effects of the opioid epidemic, the negative effects on workers of non-compete agreements, the contours of the gig economy and even authored a book about the music industry.” The book, “Rockonomics,” is expected to be published in June.

In a 2013 interview, Krueger said ILR professors such as John Burton and Robert Hutchens were instrumental in his career. "ILR introduced me to economics and inspired my interests in using economics to improve people's lives.”

He recalled receiving sage advice from Hutchens as he tackled a paper about worker pay.

"I remember he told me that I should only write on this topic if I was comfortable with shades of gray. In one way or another, I have spent most of the rest of my career grappling with this question."

As a first-year Ph.D. student at Harvard, Krueger politely challenged Professor Ronald G. Ehrenberg after Ehrenberg gave a talk in Cambridge. He told Ehrenberg he had made an error in an ILR lecture the previous year.

“I realized he was right and knew right away that we had been lucky to have a student at ILR who surely was going to tower over all of his former professors in a very short period of time,” said Ehrenberg, Cornell’s Irving M. Ives Professor of Industrial and Labor Relations and Economics. “Seeing how quickly Alan became a true superstar economist and surpassed the accomplishments of people like me has brought me only happiness and I mourn his loss to the economics profession, as well as the personal loss to his family and friends.”

“Alan was a true triple threat economist – in addition to being a great scholar and teacher, he was a devoted public servant and set aside his personal desires three times to take major positions in D.C. More important than this is that Alan was perhaps the nicest person in the world to all people, regardless of their backgrounds,” Ehrenberg said, recalling Krueger’s kind interactions with an overwhelmed student at a public event.

Krueger served on the ILR Dean’s Advisory Council and received the school’s Judge William B. Groat Alumni Award in 2013 for outstanding alumni achievement and service to ILR. In 2014, he returned to campus to share his White House experiences with students, faculty and the greater Ithaca community.

The president, referring to Krueger’s service, said, "… As we were dealing with the effects of a complex and fast-moving financial crisis, a crisis that threatened a second Great Depression, Alan's counsel as chief economist at the Treasury Department proved invaluable."

In remembering Krueger, many celebrated his intellectual versatility. David Leonhardt of The New York Times recounted Krueger’s ability to humanize economics and translate data into findings about subjects such as happiness.

Krueger, a member of Cornell Varsity Track, knew how to laugh at himself.

“I did the high jump, but just barely high enough to make the team. In fact, I think they lowered the standard a few inches to let me make the team," he said in an interview.

Krueger’s parents urged him to attend Cornell, where his older sister was majoring in chemical engineering and chemistry, so they could visit both of their children at the same.

A few years ago, Krueger shared advice for students.