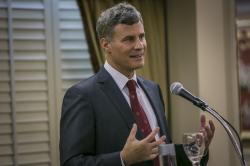 "Lessons from Serving as the President's Chief Economist" is the title of his talk, free and open to the campus community.

The annual lecture is named in honor of Professor George Staller, who taught economics at Cornell for 49 years. He died in 2009. The lecture is made possible by a gift from Russell B. Hawkins '77 and is sponsored by the Cornell Economics Department.

In 2011, President Barack Obama appointed Krueger to chair the three-person Council of Economic Advisers, an agency within the Executive Office.

In an interview last year, Krueger described being the president’s chief economic adviser as "a dream come true."

When Krueger stepped down in August 2013 to return to the Princeton University faculty, President Obama lauded his service, saying, "… he's been the driving force behind actions that we've taken to help … create new jobs and arm workers with the skills they need to fill them, to reduce income inequality, to rebuild our aging infrastructure, and to bring down our deficits in a responsible way."

Krueger had worked in federal government twice before – as chief economist of both the Treasury Department and Department of Labor.

Throughout his career, Krueger said, he has relied on what he learned at the ILR School. "ILR introduced me to economics and inspired my interests in using economics to improve people's lives."