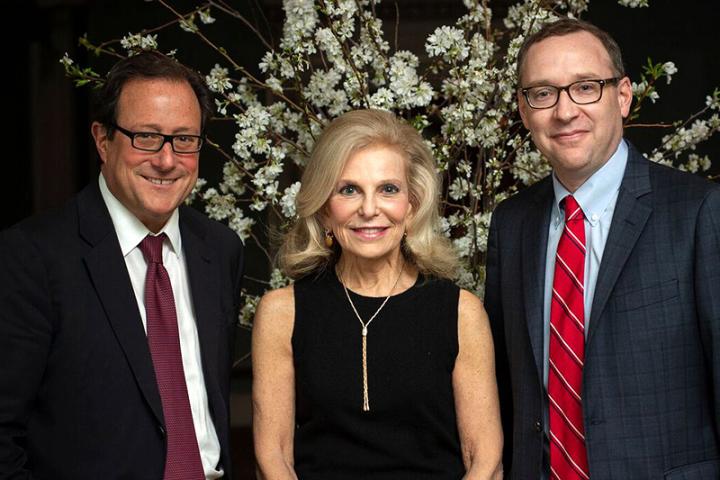 “Never before have I seen so much encouragement, engagement or heard from so many about the great things that are going on in the school,” said Hallock, ILR’s Kenneth F. Kahn ’69 Dean and Joseph R. Rich ’80 Professor, before introducing Groat Award winner Joan Parker ’70, M.S. ’72, Ph.D. ’74 and Alpern Award winner Glenn August ’82. Hundreds gathered at The Pierre hotel in New York City to honor their professional accomplishments and commitment to ILR and Cornell.

August, founder and CEO of Oak Hill Advisors, an alternative investment firm with approximately $33 billion of capital under management, said as he accepted the Alpern Award, “Cornell was a very special and formative part of my life. I really view it as an enabling period.”

August, who completed his studies at Cornell in less than three years, gave credit to Ginny Freeman and Jim McPherson, who advised ILR students for decades. “They let me finish all of my ILR curriculum in two years,” he said.

August began his graduate business studies at Cornell and then at Harvard Business School, which had him spend three years working before matriculating. After Harvard, August became co-founder of the firm he has led since 1999.

In his remarks, August stressed the importance of the social sciences.

“We live in a world today where everyone is focused on entrepreneurship and what’s the next Facebook. They are using college as a vocational school. I believe the social sciences offered at ILR are an absolutely incredible background for any career."

August described his ILR education in organizational behavior, sociology and psychology courses as influential. “The whole idea of putting organizations, individuals and institutions in social psychology was incredibly helpful to me,” he said. "All that background 35 years later is still real. I run a business where it’s about markets and it’s about people … and I will tell you, the people count more!"

In her remarks, Parker said that in high school she thought she was “headed to Radcliffe to major in English.” But her social studies teacher encouraged her to study industrial and labor relations, and advised her to look into the ILR School.

She is a nationally recognized arbitrator and mediator of labor and employment disputes and serves as a permanent arbitrator under numerous collective bargaining agreements. She is an active employment arbitrator, mediator and factfinder in the nonunion sector.

“At Cornell, I knew I was preparing to do something meaningful with my life,” said Parker, who said she was supported at Cornell by such faculty members as ILR Professor Jean McKelvey, who inspired her to enter a field traditionally off limits to women.

“Jean McKelvey was my heroine,” Parker said. “She, more than anyone else, persuaded me to take a doctorate instead of going to law school.”

“They did not take ‘no’ for an answer and never assumed there was anything they could not do because of their gender,” Parker said. “They made me believe that is was perfectly normal for a 28-year-old woman with a newly minted Ph.D. to start a career as a labor arbitrator and mediator. The ILR School was a place where women, despite our small numbers, were never discouraged.”

Her practice as a mediator and an arbitrator developed quickly in the male-dominated labor-management community in part due to ILR’s reputation, she said: “They sure knew Cornell ILR and they had confidence in my pedigree.”