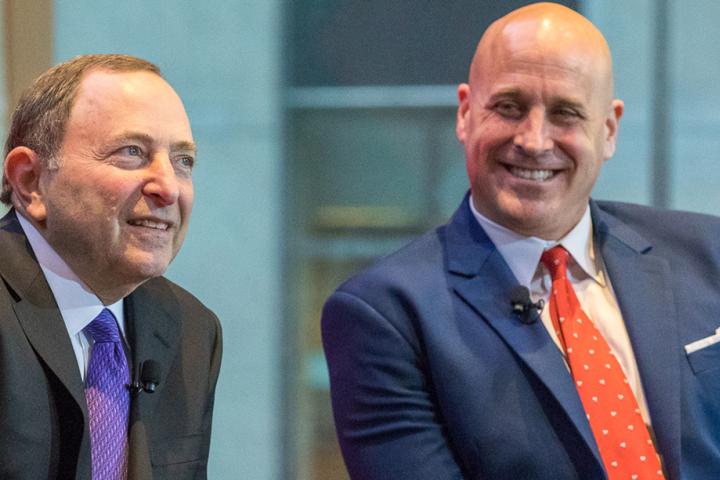 Hundreds of ILR School graduates and other Cornellians are dedicating their skill and passion to lead professional sports forward.

They set the bar for pro leagues and teams, guide top media networks, represent many of the world’s best athletes, improve fan experiences, advocate for worker rights and build mega-deals that define the industry.

More than 250 of these people – including some of the industry’s most influential leaders – gathered Nov. 15 at the Grand Hyatt in New York City for the Cornell ILR Sports Leadership Summit.

They discussed legalized sports gambling; the U.S Supreme Court ruled this year that states can authorize betting. It will flourish, benefiting both the industry and professional athletes, some said. The future of women’s professional leagues, on the cusp of breaking into a bigger role in the industry, some said, was also discussed.

Millions of fans are participating and watching professional gamers in eSports competing in video game tournaments. This represents a huge change in how fans are engaging with sports and has created a burgeoning revenue stream, according to a discussion led by Nyea Sturman ’00, general counsel of the Orlando Magic.

Alums spoke of skills learned at Cornell that prepared them to be leaders in an industry that generates more than $70 billion annually in North America.

“I wouldn’t be here without Big Red and ILR,” said Gary Bettman ’74, National Hockey League commissioner. “ILR teaches you about figuring things out. The training and learning is unbelievable.”

Collaboration, a skill central to the ILR curriculum, has served him well, Bettman said: “You can’t make a deal that works without it.”

Mike Levine ’93, co-head of CAA Sports —  a division of Creative Artists Agency, which represents athletes, actors and others —  urged Cornell ILR Sports Business Society students attending the summit to “cherish the time you have at Cornell. Realize how special it is … people you met at Cornell can be instrumental in your career.”

Levine said he worked hard as a student and as a Cornell lacrosse player, which helped prepare him for a career in a sector where soft skills are essential. “Being nice has served me well. You can win by being a nice guy … the relationships are what make the deals in our industry work or not work.”

Jimmy Pitaro ’91, president of ESPN and co-chair of Disney Media Networks, was interviewed on the stage by Sarah Spain ’02, espnW columnist and ESPN TV and Radio personality. Pitaro said he was working as a lawyer when he turned his passion for sports into a job. As a student and Big Red football player, he developed a strong work ethic and the ability to multitask. His advice to students? “Work hard and be nice to people.”

Amani Tristan ’19, who attended the summit, said she dreams of being a sports industry executive with a focus on outreach to youth. She said the summit affirmed her interest in the field.

“I’ve been passionate about sports for the longest time. A career in sports is perfect for me,” Tristan said, pointing to her immersion in ILR’s business and law-related courses, her experience as a Big Red track athlete and high school basketball player, and her internships with Major League Baseball.

ILR Interim Dean Alex Colvin said the summit was an example of the school’s land-grant outreach mission. Connecting research and practice, the summit spoke to Cornell’s impact on the sports industry, he said.

“Cornellians,” Colvin said, “are truly at the epicenter of leadership and innovation in the world of sports.”