Insight for an Industry 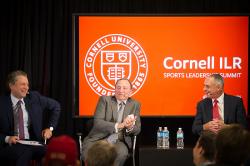 Close to 300 people including top executives and key sports industry leaders gathered at The Westin Grand Central in New York City Sept. 18 to discuss some of the most important issues shaping the industry’s future.

Moderated by renowned journalist Jeremy Schaap ’91, it covered industry-changing initiatives such as the growth of community outreach by the leagues, the complexities of collective bargaining for teams and negotiation of individual salaries for star players.

Manfred said learning analytics and economics at ILR gave him a framework for the work he does now. “I wouldn’t be doing what I do today without ILR.”

Bettman said ILR’s curriculum prepares students to be “almost like a social engineer. You have to be able to figure things out.”

Kevin Hallock, ILR’s Kenneth F. Kahn ’69 Dean and Joseph R. Rich ’80 Professor, led the creation of the event after consulting with key alumni and in recognition of strong ties between ILR and the sports industry.

“Cornell contributes remarkable talent to professional sports and ideas shared at the summit are driving real-world problem solving in this important industry. This type of work exemplifies our mission to advance the world of work and further engages us with stakeholders across the world,”  Hallock said.

“We feel very fortunate to be in a position to bring this group together and gain their collective insights on critical issues that will impact the future of sports.”

For decades, ILR and Cornell graduates have been helping guide the strategic direction of many sports industry sectors – from modernizing the way sports are viewed by consumers to merchandising to league operations.

Speakers included Mike Levine ’93 of CAA Sports, one of several who talked about the growing number of athletes amplifying social statements through social media. “Athletes are using their platforms to do good in the world,” he said.

Kimpson has proposed legislation in his state that would force universities to share the wealth they derive from college athletics with the athletes. Boeheim, while not against athletes receiving more help, spoke out against the idea of paying college athletes, stating that most schools actually lose money on athletics and that the students are getting an education and a platform for future success.

Hallock and other school leaders expect that the summit will facilitate continued growth of sports-related programing at the school and position the ILR School and Cornell to continue their contributions in shaping the future of the sports industry.