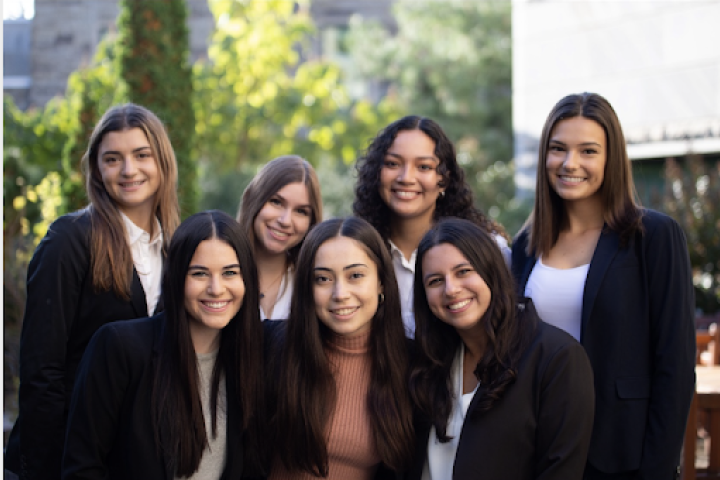 The ILR Women’s Caucus serves to strengthen the academic, social and professional aspects of its members' experiences at Cornell.

Rooted in women’s empowerment and contentious conversation, the ILR Women’s Caucus has cultivated a space of growth, enrichment and solidarity for women of all backgrounds.

“No matter what we’re talking about, everyone’s voice is heard,” Anika Fischer ’23, caucus co-president, said in an interview with ILR.

The caucus, she said, “is a smaller community within the already tight-knit ILR community. Members can turn to [ILR Women’s Caucus] to talk about everything and anything.”

Members report that they initially joinced ILR Women’s Caucus in search of community and belonging, and continue to participate because of opportunities to grow as individuals. Members say they participate in discussions that challenge their preconceived beliefs about equality, learn from the diverse perspectives of other club members and practice solidarity in a way that transcends racial, class, gender and other lines.

One member recounts her experience in participating in a caucus discussion on U.S. media representation of women. “[We] discussed the differences of public perception and reaction of white women vs. women of color … [we went into] deep conversation about the many missing indigenous women [in the U.S.] and what meaningful action steps [we] can do to better educate [ourselves] and others.”

Hannah Schmelkin ’22, caucus co-president, said, “We really pride ourselves in creating an inclusive space. Every meeting is a psychological safe space…[We create] a safe and trusting environment in every single meeting.”

The council's governance structure includes shared leadership through an executive board and a large number of committees so that many members have the opportunity to develop their skills as leaders and contribute in meaningful ways to the organization. This approach helps build an active and meaningful community.

The groups also produces the annual ILR Women’s Caucus magazine – edited this year by Olivia Schwartz ‘23 – a platform for women to express their views, raise concerns or present creative work.

The club also has undertaken charitable and fundraising activities, including raising several hundred dollars for the Women’s Opportunity Center in Ithaca – a non-profit that focuses on helping economically disadvantaged women achieve their career goals.

The caucus also invites regular speakers to address relevant issues. For example, the caucus invited its faculty adviser, Professor Rosemary Batt, to share about the ILR experience, how it is to be a woman at Cornell, and her career path and eventual role as a professor in higher education.

Schmelkin recalled, “[Batt] wowed everyone with her beautiful story of her life and words of wisdom as women going through college and our early careers. We had many members ask questions, and it was such a great moment to connect Professor Batt to our group — she is more than just a ‘club adviser’ to us!”

As Batt, the Alice Hanson Cook Professor of Women and Work at the ILR School, leaves for sabbatical, the caucus is excited to welcome its new adviser, Assistant Professor Devon Proudfoot, whose research and teaching focus on diversity and inclusion and gender equality and creativity.

Batt said she also learned a lot from caucus members. “I feel I’ve learned more from them than they have from me. I have listened to the thoughtful conversations that the women have had about a wide range of issues – from the pressures of being a woman at Cornell and their aspirations and concerns about their careers to their perceptive observations about the challenges women face in the broader society and political world.”