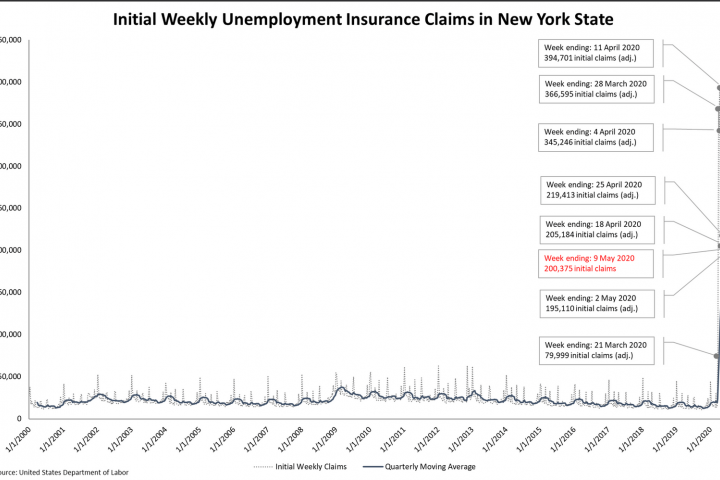 Russel Weaver published this piece on the High Road Policy blog. You can read the entire post here.

Another week, another roughly 3 million initial unemployment insurance (UI) claims made in the U.S. – more than 200,000 of which came from New York State.

After eight weeks of following these numbers, we realize that folks might be becoming somewhat desensitized to them. After all, every week seems to bring another reminder that we are in “unprecedented” territory.

The reason for these regular reminders, of course, is that we are in an unprecedented crisis. Consider that, per yesterday’s U.S. Department of Labor (DOL) data release, the total number of UI claims made in New York State since mid-March has now surpassed 2 million. To put that figure in perspective, the combined population of New York’s 26 largest municipalities excluding New York City is estimated to be 2,005,983 persons. In other words, the State’s labor market has shed about 26 cities’ worth of jobs in a little less than two full months. On average, the number of UI claims made each week is about equal to the population of the City of Buffalo.

How, with numbers like those, is it possible to become desensitized?

Read the rest of this piece on the High Road Policy blog here.