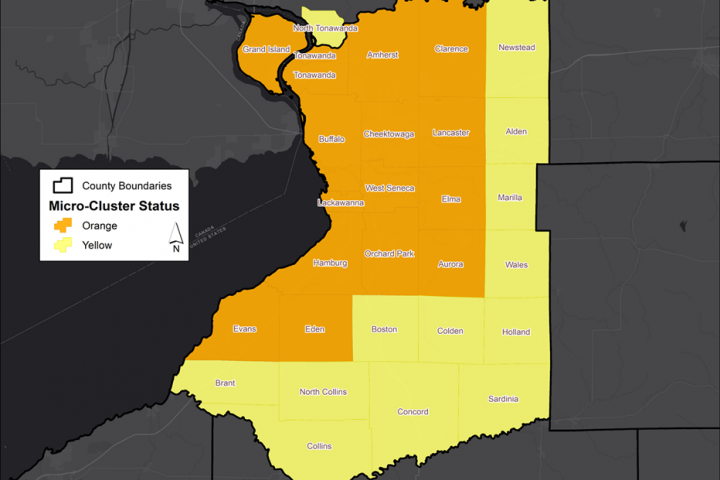 In late October 2020, New York State Governor Andrew Cuomo issued Executive Order 202.68, creating a “micro-cluster” strategy that “identifies [COVID-19 case] clusters and the areas around them and categorizes them into one or more color-coded zones with corresponding levels of restrictions based on severity.” The order establishes three types of “clusters”:

When the Governor’s micro-cluster strategy was first unveiled, the City of Buffalo and its surrounding suburbs in Erie County were given a Yellow Zone designation. Less than two weeks into that strategy, however, with COVID-19 cases in Western New York continuing to surge, the Governor moved Erie County’s Yellow Zones into the Orange, and the remaining (non-micro-cluster) areas of Erie County were moved into the Yellow Zone. That updated scheme, which took effect on 20 November 2020 and remains in effect as of this writing, is shown in the map below.

After nearly two months of operating mostly in the Orange Zone, residents and businesses in Erie County are beginning to wonder whether the micro-cluster strategy is working for the region. For instance, just last week, local news station WGRZ reported:

“The problem with the cluster zones is that there seems to be no rhyme or reason why some areas are designated and others are not. These zone designations determine what schools have to do in order to be open, and also affects local businesses such as restaurants.

Much of Erie County is currently in an Orange Zone, which has the second most strict designations behind the Red Zone. The rest of the county, and parts of Niagara and Genesee counties, are in a Yellow Zone.

These haven't changed in a long time — despite a lot of changes in terms of COVID-19 percent positive rates, hospital capacity, and other factors, especially when comparing our region to the rest of the state.

And that's where this gets problematic, especially for Erie County's Orange Zone. It's targeted for restrictions — even though a lot of other places across the state are far worse, based on all the available data.”

As suggested above, by at least one metric – the number of new COVID-19 cases per day – the situation in Erie County appears to be improving. Even with recent record-setting days and notable fluctuation in daily totals, the overall trend in new cases since around 20 November has been relatively flat, even as it has increased for New York State as a whole:

However, as the WGRZ report from above noted, the geography of Erie County’s micro-clusters raises at least two important questions. First, to what extent have Orange Zone closures been associated with greater foot traffic in less restrictive Yellow Zones (which could reduce the regional effectiveness of the more restrictive Orange Zone measures)? And, second, are COVID cases trending down everywhere in Erie County, or is there a relationship between cases and zone status?

To address the first question, Point of Interest (POI) foot-traffic data from SafeGraph can be used to explore customer visits to businesses and related establishments over time. The figure below shows general patterns of activity between 9 November 2020 (the first day for which archived data were available and the date on which initial Yellow Zone status went into effect in Erie County) and 26 December 2020 (the last date on which SafeGraph updated the dataset before it was deprecated). Data from the first week in December (1 Dec – 7 Dec) are missing due to a gap in the author’s data collection efforts during that week because of scheduling conflicts.

The following figure plots POI visits to all locations, by Zone, during this time period. Note that the Orange Zone pictured above contains roughly 93 percent of Erie County’s population and 92 percent of the POIs tracked by SafeGraph. Due to these large differences in magnitude, Yellow Zone POI visits are plotted on a secondary axis. Thus, while Yellow Zone foot traffic never exceeds Orange Zone foot traffic, the rate of change in the former tends to exceed the rate of change in the latter on several occasions – most notably from 19 to 20 November, the date on which Orange Zone designation went into effect.

This finding corroborates anecdotal evidence from media reports that selected Yellow Zone businesses experienced influxes of traffic from Orange Zone areas following the strategy change in mid-November. According to our analysis of the SafeGraph POI data, at least five types of establishments experienced decreases in foot traffic Orange Zones after the micro-cluster policy change, but increases in foot traffic in Yellow Zones at the same time. These establishments include:

What about COVID-19 cases? Although cases are not tracked by micro-cluster status directly, Erie County publishes data on cases at the ZIP Code level, which can be used to approximate changes by zone type. The map below overlays ZIP Codes (and SafeGraph POIs) onto the micro-cluster geographies from above. For the purposes of the present exercise, all ZIP codes that intersect both the Orange and Yellow Zones were assigned to one of these micro-clusters based on physical area. That is, the micro-cluster that contains more than half of a ZIP code’s area was defined as the ZIP code’s micro-cluster (so, for example, ZIP code 14170 was assigned Orange status in the following analysis).

Because the Erie County ZIP code-level COVID-19 data portal is not updated daily, new cases had to be aggregated into weekly totals. The following figure plots those weekly totals for the period from the week ending 8 November 2020 to the week ending 27 December 2020, roughly corresponding to the time series data graphed above. As above, due to large disparities in population, Yellow Zone cases are graphed on a secondary axis:

To add greater legibility to the above totals, the next figure reports the percentage change in week-over-week cases in Orange and Yellow Zone ZIP codes. The results show that the overall (Countywide) trend in cases since early November has played out differently in the two micro-cluster types. Notably, in four of the six weeks following the micro-cluster strategy change, weekly cases in Yellow Zones either rose more quickly or declined more slowly than cases in Orange Zones. Note that one of the two weeks for which this observation did not hold occurred immediately after the micro-cluster change, within the COVID-19 incubation period. For that reason, a more accurate read is arguably that percentage changes in weekly cases in Yellow Zones were worse when compared to Orange Zones in four of five (80 percent) of weeks following the status change. Although it is essential to remember that correlation is not causation, this outcome occurred at the same time that foot traffic in Yellow Zone businesses seemed to increase after tighter restrictions were placed on nearby Orange Zones.

The possibility that increased foot traffic from Orange Zones contributed to disproportionately high increases in new cases in Yellow Zones reveals the inherent challenge in trying to curb the spread of a virus with non-universal, zonal restrictions. Namely, geographic variation in rules and regulations often increases flows of activity from more restricted spaces to less restricted spaces. Thus, even as economic activity in the more restricted areas decreases, limiting local exposure to active COVID cases; economic activity in less restricted areas may rise, meaning that potentially infective person-to-person interactions are not eliminated from, but simply moved to other locations in the region.