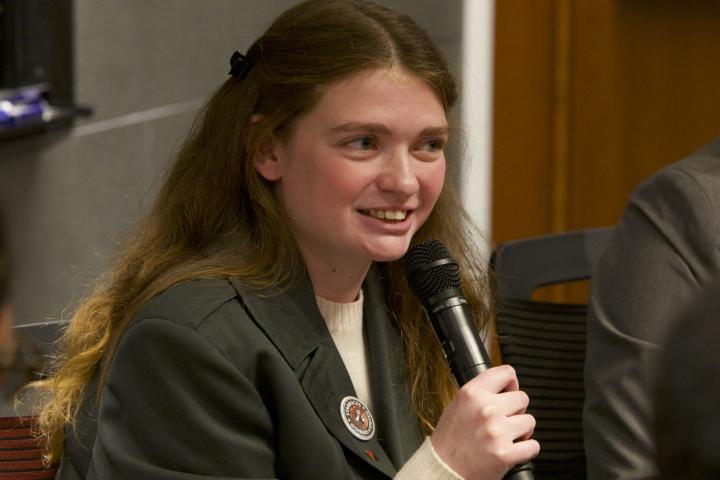 Four labor organizing trailblazers shared their experiences at a forum sponsored by the ILR School and Cornell Law School, and moderated by Mark Pearce, former chair of the National Labor Relations Board.

“We’ve seen organizing wins in some very different sectors. In these last months, we’ve seen athletes, farmworkers, baristas and warehouse workers,” Pearce said in opening "New Organizing in New York State: Worker Power and the Law" on Oct. 19 in the law school. “Why are workers so eager to have organizing as part of their toolkit?”

Heather Goodall, an Amazon Labor Union organizer who led the campaign at Amazon’s warehouse near Albany, responded by saying, “I think that workers have found themselves in positions where learning about their rights and learning about their opportunity to actually have a voice is empowering.” She discussed how workers frustrated with low wages and poor working conditions are organizing and standing up for themselves, even against trillion-dollar companies such as Amazon.

Simon Rosenblum-Larson, an organizer for Minor League Baseball players, talked about players losing pay when the season was suspended due to the pandemic. After a small win through organizing efforts, players realized “if we speak out, we can continue winning.” That experience “sort of radicalized a lot of folks,” Rosenblum-Larson said.

Jaz Brisack, one of the main leaders of organizing efforts at Starbucks, said the company’s advertising contradicts how it treats workers. More specifically, she said, the company strives to label itself as pro-Black Lives Matter and LGBTQ+ friendly, but does not treat workers in a humane way.

Jessica Garcia, assistant to the president of the Retail, Wholesale, Department Store Union, spoke about the power of different organizing strategies. “It’s not either or. Whatever really shows worker power and how they choose to express themselves; that’s what’s really important.” Garcia emphasized that workers’ goals are what drives change within the workplace, whether it’s being recognized or having higher pay.

Pearce ended the panel by asking Goodall, Rosenblum-Larson, Brisack and Garcia whether they thought that what they were witnessing was a moment of a movement. Most agreed that it was a movement, as many of the companies they are facing are widespread corporations.

Rosenblum-Larson made the point that because most people have been to a Starbucks or have ordered from Amazon, media attention was high and increased the public’s awareness of workers’ issues.