Tefere Gebre: The New Labor Movement Must Lead the Fight for Immigration Reform 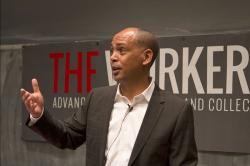 Tefere Gebre is the Executive Vice President of the AFL-CIO. Tefere, born in Gondar, Ethiopia, was a political refugee and immigrated to the United States as a teenager. While in college, Tefere worked his first union job as a night shift loader at UPS and a member of Teamsters Local 396. Since, Tefere has devoted his entire life to the values of hard work and a voice at the workplace. During his tenure as the Executive Director for the Orange County Labor Federation Tefere redefined the growing labor movement in Orange County, California, and was one of the key forces in advancing progressive change in the traditionally conservative county. Don Bazley, Senior Multimedia Producer at ILR, and Prerna Sampat, Communications and Website Manager at The Worker Institute, interviewed Tefere at the Cornell campus in April, prior to his keynote speech at Union Days 2015.

Don Bazley:  A new labor movement is rising up and growing - worker centers and groups like Taxi Workers Alliance. How has this shift affected your organization? How is your organization reacting to what's happening in the bigger picture?

Tefere Gebre:  We're seeing a new emerging movement: from worker centers, to cab drivers, to sanitation workers, to people that you couldn't imagine would be joining into a union or collectively demanding for their rights 10 to 20 years ago.

These new groups are popping up today, and the merging of the old and the new is something beautiful to [witness]. Something powerful is emerging.

I am a result of that shift [at the AFL-CIO]. Historically, someone who talks “funny” like me, someone who looks like me has no business being one of the three elected officers of the world's largest labor federation. But that is the change that we're seeing and that is the labor movement trying to [respond] to current realities… I came in with the burden of knowing that.

I'm the first male Black person elected to office at the AFL-CIO. I'm the first immigrant elected as an officer at the AFL-CIO and I have the responsibility of speaking for immigrant workers. I'm supposed to be their mouthpiece and their consciousness [in] the national labor movement.

Prerna Sampat: Could you talk about how immigrant workers are important to the revitalization of the labor movement as you see it?

Tefere Gebre: [The AFL-CIO’s] agenda is that we're working under the framework of raising wages… Even from a selfish perspective for the labor movement, when you have 11 million people who are working in the shadows, working for wages below what their labor is worth and working in fear, that has an effect for all workers in this country. It’s pulling wages down instead of pulling wages up.  We want to bring everybody above the fray.

We want to bring everybody out from the shadows and any worker who's being abused at the workplace should not have any fear from going to authorities and reporting their employers who are taking advantage of them.

When that happens, we all win and that is the basic understanding that why we're [working towards] immigration reform. And that’s besides the fact that these are the people going to school with our kids, these are people who are going to church with us, these are people who are doing everything we do. And they are working next to us at our workplace.  They are in every way Americans except a piece of paper that says they're not Americans.

Tefere Gebre:  A lot of people say why are you guys working with worker centers that are directly competing with you? Why would people join a union if they can be part of a worker center?  The answer is simple.

If the labor movement wants to be relevant in this country, and in the workers' lives, it needs to learn and step up and speak for every worker. It doesn't matter if they have a union card or not.

Worker centers serve as gathering place for workers to actually deliberate on what their [wages are] going to be and lean on each other to fight back against workplace abuses.

It may not be the same word, but they're practically what unions used to do a long time ago. Any worker who wants to join a union should join a union - that's what our ultimate goal is. But until that happens, worker centers provide the space for workers to come together and fight for what's right for them.

Prerna Sampat: How does the AFL-CIO plan to engage the issue of immigration in the upcoming presidential election?

Tefere Gebre: [The AFL-CIO approaches] immigration reform from a lot of angles. So here's the thing, people have this perception that everybody wants to come to the United States because they just want to come to the United States. Sometimes there are policies that [the Unites States] makes which makes [impossible] for people to live in their own countries. Policies like the North Atlantic Free Trade Agreement (NAFTA) and Central American Free Trade Agreement (CAFTA).

Last fall, we witnessed a surge of children coming from Central American countries. If we just sit down and think about it and start asking “why?” and consider the risk and reward of traveling 1,700 miles through a desert, knowing the [chances] of not surviving that trip? Why would someone decide to send their little kid? Why would a little kid decide to say: “I would rather die than be here.”?

While there may be more to it, these things really started happening after we got into free trade agreements with these countries. That is really starving their people and giving them no other option but to come here. And when they get here, we throw tomatoes and rocks at the buses these immigrants are traveling on.

If we call ourselves a democracy… all of us as Americans have to be responsible to what our government does. [When you look at the big picture,] our government creates these situations.

[The AFL-CIO] is worried about this thing called the Trans Pacific Partnership (TPP) that incorporates about 62 percent of the world's GDP in terms of the countries that are involved in the Trans Pacific Partnership. Our government is in a process of negotiating backroom deals with countries with no basic human right laws and countries who don't even have any kind of a minimum wage law.

So what does that mean for the American worker when they are forced to compete with someone who makes $0.35 an hour in Vietnam while they’re making $35.00 an hour [in the US]?

This does not mean we’re against trade. We can actually craft good trade agreements. Good trade agreements can't be crafted behind closed doors, in secret, and using a “Fast Track” mechanism. We're fighting fast track tooth and nail, with everything we can. We need everybody’s help, including students on campus, to stop Fast Track.

We believe if we stop fast track, we can actually manage the amount of people actually who want to come into this country. If you go back and visit Mexican farmers, they'll tell you horror stories.  I recommend to people a book called Illegal [Add publication and link to the resources section] which is written entirely by immigrants themselves, undocumented immigrants themselves documenting why they came here, without [exception], each one of these Mexican [immigrants] who came here said if it wasn't for NAFTA, they have no business actually for being here.

Don Bazley: What's your view on the role that Pres. Obama is playing in this pushing the fast track?

Tefere Gebre: I think we need a system change, not presidential change.  Pres. Obama unfortunately got elected with a system that we have.  That is true, even from the labor movement's perspective… our politics have led our agenda instead of our agenda leading our politics. When you elect someone and the people they surround themselves with, their trusted advisors don't come from the value system that you come from, you get results like we're getting with free trade with this president.

We have to be a movement that’s willing to call out our foes and our friends when they are wrong and when they're gambling with the lives of American workers.