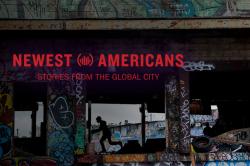 Julie Winokur and Tim Raphael look to return to the honest and powerful storytelling that our country was built upon with their platform, The Newest Americans. This means amplifying the voices and stories of immigrant communities that make up so much of American identity. With a nuance and precision aimed to cut through the deafening noise of the current media landscape, The Newest Americans, offers a fresh perspective on powerful storytelling with the goal of social change.

The Newest Americans is a multi-media project and platform that seeks to reclaim storytelling and the idea of the American Dream, returning it back to its immigrant roots. The project is headed by Julie Winokur, founder and executive director of the nonprofit media company, Talking Eyes, which creates powerful visual media in service to social change, and Tim Raphael, director of The Center for Migration and the Global City at Rutgers University.

Largely working out of Rutgers University, a campus decreed the most diverse in the world by US News and World Report, The Newest Americans exists as a collaborative and inclusive platform utilized to elevate stories of marginalized immigrant communities. It delves deeper than traditional news sources by incorporating an array of mediums including film, photography, interactive graphics, and text. By telling stories in an honest, fresh, and engaging manner, they hope to have their stories picked up by more traditional mainstream media outlets which will then reach a greater number of people.

"We're always looking at how many ways can we tell a story, because each of us absorbs information more readily from different formats, so we feel like there is a way to play to what can be included in each format that may be a little fresh or different and that the other piece hasn't done," said Winokur.

"I think its important to have freedom in what we do best, to identify and tell a story. But to also to do justice and respect the people in the story," she added.

The project serves as a reflection of the diverse and bustling community that is Newark NJ, but it also serves as a reflection of the country in its entirety, a dynamic country that is perpetually in flux. Julie says they wanted to use their location, "As a bellwether for where the whole country is going. So we wanted to do a documentary story telling project that would capture a different narrative around immigration and identity. We felt there was a real dearth of storytelling that reflects the reality that we are living in. So that was the catalyst for getting the project off the ground."

The team and project found immediate success when they published their first piece, Hijabi World, a film that depicted the reality of wearing Hijab in the United States. The inspiration for the story came from a group of young Rutgers students who were angered by a BuzzFeed article that oversimplified and misrepresented what it was like to wear Hijab in the United States. Raphael encouraged the girls to channel their frustrations into creating a film which would accurately display how they experienced wearing Hijab in America everyday. Once published, the story quickly gained traction and today has been viewed over 2 million times in over 20 countries.

This is what makes The Newest Americans such a unique platform, it does not seek to objectify people or repackage a story, instead it seeks to return the microphone to those who experience these realities. In the words of Winokur, "A lot of what we are doing is trying to empower people to speak for themselves in their own voices."

The dynamic storytelling platform seeks to provide the resources for marginalized communities to take back control of history from those traditionally in power, thus making the stories we consume those born out of democracy rather than tyranny.

"They always talk about how history is written by the victors. You basically get to rewrite history when you are in the seat of power. And so whats happened is we have a vision of America and what makes us strong and who we are, that is not a true reflection of our reality. History has been historically written by the entities that seize control and shape our story in their own image. So that is ultimately detrimental," said Winokur.

Both Winokur and Raphael shared the belief that they were beginning to observe a dangerous change in the way immigrant communities were being represented by the mainstream media. They felt it was necessary to take action to swing the pendulum of history back to the times where the American Dream represented hard working immigrant communities that sacrificed a great deal to be Americans.

"One of the things that became abundantly clear to me as I got to know our students is that they have amazing stories, and that they are not the kinds of stories that are being documented in the media. They are classic American stories of social mobility, dreams, and ambitions that are often achieved against great obstacles. The other story is what we build the American mythology of success and American Exceptionalism around and yet in the political climate these stories were being stigmatized as anti-American, as dangerous. And the country that I had grown up believing in, which was founded as a country of immigrants, that version of the US was under attack. So by sharing those stories we hope to add to the discourse," said Tim Raphael.

This sentiment has become ever more salient, and the mission of The Newest Americans, ever more important, as much of the nation still grapples with the election of a candidate whose election platform was centered on unsupported and racist stories meant to alarm and instill fear in Americans. With the rhetoric of Donald Trump and his constituents being considered mainstream, Winokur and Raphael felt there was a need to push back and return to a focus on the reality of this country, a reality that America has been and continues to be a country of immigrants. Winokur speaking on the renewed urgency of the project said,

"The backlash has made the project even more critical. Because when you have an administration that is maligning members of our society, it becomes urgent that you correct the record and that takes all of us. It is a slippery slope, it is dangerous to demonize and to allow people to become scapegoats for the frustrations of others."

In the long run the project hopes to elevate marginalized immigrant communities for years to come by imbuing young students from these communities with the skills to tell their stories in a meaningful and thought-provoking manner. They aim to achieve this through a class that they offer at Rutgers University which carries the same name as the project.

"We are a small organization that can only cover so many stories, and ultimately people need to have the tools and the resources to tell their own stories and advocate for themselves," says Raphael.