The Long Ride: Honoring the Legacy of the Immigrant Workers Freedom Rides 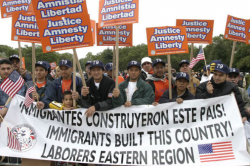 Alexandra Wagner
“The Long Ride” chronicles the compelling bus journeys of over 900 immigrants and allies as part of the new Civil Rights Movement for immigrant workers in the United States. In 2003, a dozen buses departed from various major cities all around the United States en route to Washington D.C. Rigo Valdez, VP and Organizing Director of UFCW local 770, narrates the documentary as one of the participants on the bus from San Francisco.
From a young age, Valdez was exposed to labor activism as he worked the grape harvest season in California. The son of labor activists, he began his career working for the Service Employees International Union (SEIU) in 1995. During this time, a new era of labor organizing was beginning under the progressive actions of AFL-CIO President John Sweeney. Valdez began working for the AFL-CIO in 1999, when immigrant workers were being included in unionization efforts for the first time. Previously, there was not a strong coalition between immigrant rights groups and unions. Valdez worked to bridge this gap when the idea for the 2003 Freedom Rides was born.
One of the main goals of the Freedom Ride was to bring a focus on immigrant rights to the upcoming 2004 elections. “It’s not just about immigrant workers’ rights, but about living wages, about decent education. This was the beginning of us taking back America” said Valdez.
“The Long Ride” is very timely as it relates to the current political situation. With regards to his stance on today’s political climate, Valdez remarked that “Trump will be the great unifier” in the sense that he will unify groups ranging from LGBTQ groups, women’s groups, immigrant activist groups, and more, in their fight against inequality. “The left has been fragmented for many years, and this will be a great test.” The current situation sets the stage for organizing in different ways. For example, Valdez and film director Valerie Lapin Ganley cited the importance of calling local congressmen, rather than emailing them, to urge for immigration reform.
Finally, Valdez brings a unique perspective to the documentary as both a character and as its narrator. Director Lapin Ganley cites her decision to use Valdez as the narrator because she did not want to “use an outsiders voice.” “The Long Ride” serves to amplify the voices of immigrants, and Valdez’s commentary does just that. The messages of the 2003 Immigrant Worker Freedom Ride continue to ring true today over a decade later. In the words of Valdez, “The time to stand up and fight is now.”
The Worker Institute at Cornell will be hosting a free screening of The Long Ride in New York City on May 4, 2017. Visit the event page to learn more and get tickets.