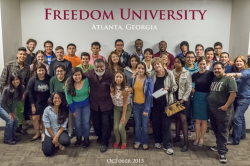 Alexandra Wagner
Phone interview with Pamela Voekel, co-founder of Freedom University and Associate Professor of History at Dartmouth College
Freedom University, based in Athens, Georgia, was established in 2011 as an outlet for undocumented students to receive education and training that is not otherwise readily available to them. Freedom University provides services such as tuition free courses and assistance with scholarships and college applications. The following interview was conducted with Pamela Voekel, one of the founders of Freedom University, and provides greater insight into the university’s mission and inspiration.
The piece that you recently published for NACLA tells the story of an undocumented student attending university in Georgia. The discovery of her undocumented status led to an investigation of the legal status of all students attending state schools in Georgia, and banned undocumented students from attending the top five state campuses. In this series of events, was there a defining moment that influenced you to take action? How did this series of events contribute to your idea to create Freedom University?
One of the things that happened was that the Georgia Undocumented Youth Alliance was organizing in Atlanta around the ban. The Regents had decided to ban undocumented students from the top 5 research universities in the state and charge them out of state tuition everywhere else. One young woman was at Georgia State and had been paying in state tuition. Suddenly, she gets a bill and can’t go back. At the same time, you have other students who are in their senior year of high school, and it dawns on them that despite all of their hard work and their good grades, they’re not going to be able to go to any of these colleges or universities in Georgia.
These students began to connect with undocumented leaders from organizations like the National Immigrant Youth Alliance. Some of these leaders came to the South and did a series of trainings with undocumented youth. People from NIYA tended to be from places like Chicago or California where a lot of undocumented students are very mobilized. They started to push out to new regions. The combination of the horrible measure by the Board of Regents and the undocumented youth activism coming from other places of the country meant that there was a group of students who were particularly galvanized and active. These students sat down on Martin Luther King Boulevard and engaged in an act of civil disobedience. Until then, we hadn’t seen something quite like this in Georgia for 30 years. A couple of high schools walked out on the anniversary of Brown vs. Board of Education which got a fair amount of media attention. Simultaneously, many professors thought, “Wow, we need to get ahold of these students and ask if there is something that we can be doing to support this.”
The founding was very much led by undocumented students and followed by professors. It wasn’t clear what exactly was going to happen, but these students made it clear that they wanted to be in a college classroom. That was great, because that was something that college professors like myself could accomplish. As soon as the university got rolling, it was really compelling to the press. We got incredible coverage of the school ranging from CNN to the Colbert Report.
Can you expand upon your thoughts regarding the parallels between the opening of Freedom University and desegregation?
These students, being from Atlanta which is a civil rights hub, wanted to stress the creation of alliances. Charles Black, a board member of Freedom University, has done a lot of work with the students. He told the students that the torch was being passed to them, so to speak. Students began reaffirming that they had the right to education and this legacy.
Freedom University was founded due to student activism. What is the ongoing role of activism amongst Freedom University students?
Not all of the students who attended in the first few years had prior experience with activism. We had some students who had been the only undocumented student in their high schools. They had never told anyone that they were undocumented. Once they came, they were exposed to vocal student activists and were radicalized by this experience. Some of these more experienced student activists nudged the others forward and created a crucible to create new activists. The center of gravity for organizing before was the Georgia Undocumented Youth Alliance. Now, there is group that is using Freedom University as their base of operations.
What are some of the next steps for students who attend Freedom University?
About one in five students go on to get a four-year full scholarship. A number of students have gone on to Berea College, a fabulous college in Kentucky that only accepts low income students. Others include Tougaloo College, Dartmouth, Smith, Syracuse and more. Other people have gone on to all sorts of organizing, including Jobs for Justice and the Georgia Latino Alliance for Human Rights. There is some hybridity too; students who have gone to Berea and have come back to work for unions in Georgia and Freedom University. It’s great because we get to work with students where we know that everything that goes on here is going to get translated into and have a ripple effect. This has been one of the best things about Freedom University.