Fighting the Farm Act: An Interview with Catherine Crowe 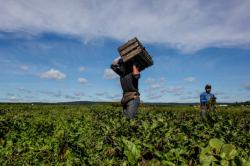 Catherine Crowe is an organizer and communications representative for the Farm Labor Organizing Committee (FLOC). In this interview, she details the campaign against the North Carolina Farm Act of 2017, which aimed to illegalize crucial union functions. In addition to discussing the details and implications of the law, she also discusses some of the goals of the union moving forward.

The Farm Labor Organizing Committee, or FLOC, is a union devoted to bringing together farmworkers for their common good. Formed in the mid-1960s, FLOC now has thousands of members throughout North Carolina and the southern United States. It is founded on two basic principles: the first allowing for farmworkers to form a union that ensures that their collective voice is heard, and the second calling for a fair restructuring of agricultural supply chains that can be held accountable to farmworkers. The union has stood up to agricultural powerhouses like Reynolds American, Inc. to ensure fair compensation and humane working conditions. FLOC's most recent campaign has been their lawsuit against the North Carolina Farm Act's anti-worker provisions, which strips rights from over 100,000 farmworkers.

The North Carolina Farm Act of 2017 is a law that FLOC views as impeding farmworker's rights to participate in unions. On November 15, 2017, North Carolina farmworkers and a coalition of civil rights group sued North Carolina Gov. Roy Cooper in federal court on the basis that the law violates the First Amendment. It also contends the law is discriminatory as it targets an industry widely represented by Latino/as. In particular, the law bars farmworker unions from deducting union fees from member paychecks, even if the union members and employers consent to the arrangement. These dues transfer arrangements are important as many of FLOC's members are guest-workers who must rely on dues deduction to make their monthly payments. The law also prohibits agricultural producers from signing any agreement with a union relating to a lawsuit. In the past, FLOC has used settlements in which employers agree to recognize a union contract to secure important concessions and improve working conditions.

Eric Rivera: How did you get involved, and what role do you play?

Catherine Crow: My name is Catherine Crowe, I got involved when I was a student at the University of North Carolina at Chapel Hill. I got involved through a student group called Alianza, that worked on FLOC's campaign, specifically the tobacco campaign. We were organizing students and trying to get students mobilized on the tobacco campaign against Reynolds American. Reynolds is the biggest tobacco company in North Carolina and is one of the leaders in the tobacco industry because it is so big and because it purchases so much tobacco in North Carolina. We found there was a connection between students and farmworkers because there was somebody on the UNC Board of Governors who was a lobbyist for Reynolds American. We realized that people in the tobacco industry were using the power they got from exploiting farmworkers to go and exploit students [by raising] tuition and making other decisions that affected [us.] So, I got involved as a student and then after I graduated I came on as staff at FLOC, as an organizer and I also do communications work.

Eric Rivera: Regarding the North Carolina Farm Act, could you explain what this campaign is?

Catherine Crow: We've been organizing for a long time in North Carolina and made a lot of really significant advances in the state, specifically around winning union contracts with the North Carolina Growers Association [and] Birch Farms. [We are] also in some ongoing fights right now, trying to get new union contracts for workers. One of them is at [Senator Brent Jackson's] farm. There is a senator of North Carolina who is also a grower, and workers on his farm organized and filed a class-action lawsuit that they ended up resolving last year. [However,] the workers on the farm are still pushing for a union contract. So this senator, along with other farmer-politicians in the state drafted up the Farm Act and at the last minute put in language that was an attack against our union. [It is,] what we believe, an attack to try to stop the progress farmworkers are making in the state. This new amendment that they added [at the] last minute does two things. [First,] it makes it harder financially for organizations to sustain [themselves] by making it illegal for farmers to deduct dues from workers who voluntarily want dues deducted from their paychecks. Secondly, it makes it harder for workers to land new union contracts by making it illegal for farmers to resolve lawsuits with a union contract negotiated as part of the settlement.

Eric Rivera: According to a press release from FLOC, the clear majority of those affected by this law are Latino and work seasonally under H2A visas. Can you explain who you are representing in this lawsuit/campaign?

Catherine Crow: A majority of farmworkers in North Carolina, as well as generally in the US, are Latino. Mostly [there are] workers from Mexico, but [there are also workers] from other countries in Central America. Increasingly, farmers are using the H2A guestworker program to fill the demand for workers. They are seeing more and more [guestworkers] every year. Through the H2A guestworker program, people from different countries can come to the US and work seasonally and return to their home countries when they are done. We already represent a little over 10,000 H2A guestworkers who come from Mexico to work in North Carolina [with the North Carolina Grower's Association.] This law is specifically targeting our union. Instead of this law affecting all workers and making it illegal for all unions to deduct dues, or making it illegal for all unions to resolve lawsuits with a union contract, it is specifically against farmworkers. So we see that as discrimination because [of the fact] those workers are Latino or because they are coming with the guestworker program.

Eric Rivera: Why do you think lawmakers want the Farm Act to be enforced? What are the underlying reasons for this sort of law?

Catherine Crow: I think this law is very self-serving, because the anti-union [provision] that was added into the Farm Act at the last minute, was drafted by farmer-politicians who are abusing their power as politicians to pass these laws. [These politicians are trying to] stop their own workers on their farms from organizing and negotiating better working and living conditions. I think it is an act of retaliation against the progress the farmworkers are already making in North Carolina.

Eric Rivera: FLOC president Baldemar Velasquez proclaimed this Farm Act wasan affront to freedom of association and smacks of racism and likened it to Jim Crow era laws. Do you see racism as a motivating factor in these sorts of laws?

Catherine Crow: Yeah, definitely. We're challenging the legality of this law because we believe its discrimination based on race. Essentially, instead of [the state] passing a law that would affect all workers for any form of dues deductions, it targets Latino farmworkers. [That is why] we believe it's a racist law.

Eric Rivera: What progress has been made so far? What sort of outcome do you hope to achieve?

Catherine Crow: Right now, we're still in the beginning stages. We filed a lawsuit against the Farm Act in December [of 2017] and we've had a couple delays since then. We're still waiting to hear the judge's opinion on it. We are hoping that this law, specifically the part that targets our union, is ruled unconstitutional. That would mean it wouldn't have any effect and therefore they would be unable to enforce the law.

Eric Rivera: What, in your opinion, is the main task for labor unions, like FLOC, representing migrant labor moving forward?

Catherine Crow: I think for farmworkers the situation is different. [This is] because farmworkers are still excluded from a lot of basic labor protections that most workers in the US have. These are freedom of association and the right to collectively bargain. Historically, [it's been] very difficult for farmworkers to come together and have a collective voice they can use to negotiate better working conditions. The tasks [going forward] that we see as a union is to help farmworkers be able to have that collective voice. [However,] instead of going to legislators, we generally go to the companies that buy from farmers because we see that these companies have a lot of power and a lot of money. We think that they need to take responsibility for the abuses that are happening in the field, and help [support the negotiation] of union contracts that would involve farmworkers, farmers and the purchasers. If we can all come together and sit at the table, we can negotiate agreements that are good for farmworkers and also for farmers.