The Fair Food Program: Fighting for Equality for Farm Workers 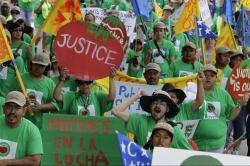 The Fair Food Program (FFP) is worker-driven social responsibility program that aims to combat the exploitative conditions faced by farmworkers in several states. This post aims to provide background to the development of the FFP as well as a summary of its many facets. It also includes a link to a full report by the Fair Food Standards Council.

For as long as they have worked the fields of the United States, farmworkers have long experienced harsh and exploitative working conditions. Forced labor, child labor, discriminatory hiring practices, substandard wages, and a growing epidemic of sexual assault and violence have plagued the workers of this industry for decades. Wage theft and violation of minimum wage laws is rampant. Facing daunting economic and social challenges, with very little legal framework to provide recourse, farmworkers form a uniquely precarious working population in the US. Our agricultural production and food supply chains are deeply intertwined with these realities. There is no context where we can consider the procurement of our food without understanding the plight of the farmworker.

In 2009, a worker-based human rights organization known as the Coalition of Immokalee Workers (CIW) aimed to change how workers, consumers, growers and retail food companies interact to create the conditions which foster the uniquely precarious position of farmworkers. The CIW was founded in 1993 on a foundation of farmworker community organizations and since then has grown into an internationally recognized organization known for its achievements in workplace responsibility. The CIW's Campaign for Fair Food, a campaign to improve the conditions for tomato workers, formed the basis of a model of workplace monitoring that would grow into a national campaign for transparency and reform. Aiming to educate consumers on the issues plaguing farmworkers, effectively bridging that gap between them, the Campaign for Fair Food then enlisted major corporate figures to dedicate themselves to more equitable labor standards and wages. This effective organization method aligns the interests of all parties involved in the farm-to-table process to establish more humane farming and food production practices.

From this successful campaign emerged the Fair Food Program, or the FFP. The Fair Food Program is a human rights protection program that aims to achieve key harm reduction practices in the agricultural industry. Premised on supply chain transparency and worker-led initiatives to achieve protection of important rights, the FFP has led to several far-reaching victories for farmworkers. A key aspect of the FFP is its unwavering devotion to the principle of worker-led social responsibility, in which the workers themselves shape and enforce their new working conditions. Initially covering the highly lucrative Florida tomato industry, the FFP expanded to tomato operations in the following states: Georgia, North and South Carolina, Virginia, Maryland and New Jersey. They have also begun to expand to different types of crop industries within Florida. The facilitators of the FFP have recognized the need for expansion into various other industries, and the report linked below includes worker testimonials to the fact that farms outside of FFP's purview suffer harsh conditions.

The FFP has accomplished an array of different things for the workers in the industries it covers. Principally, it works to improve workers' wages. It also establishes a code of conduct with zero tolerance policies for various workplace abuses which includes a grievance resolution process that can address them effectively. In addition to its workplace reforms, CIW conducts worker education programs so that farmworkers can fully understand and advocate for the rights they have secured. The FFP has also worked to increase health and safety reform on the farm, with the implementation of various plans to eliminate unsafe conditions and improve treatment of workers who are injured on the job. During the 2013-2014 season, the FFP was expanded to cover guest workers under the H-2A visa program as well.

Participating growers are subject to extensive auditing and are issued corrective action plans to improve compliance with the codes of conduct. The CIW also mediates Fair Food Agreements with corporate buyers to ensure their vision is realized at every level within the supply chain. Some of the companies that have entered into these agreements include McDonalds, Burger King, Subway and Trader Joe's. The agreements not only allow for more resources to be devoted to the cause, but also for an accountability process to be established in which suspended growers cannot sell to participating buyers. There are limitations to the process however, as detailed in the reports below. The lack of many corporate buyer's involvement with the program signals a large hurdle for the FFP to overcome and perhaps is indicative of the need for larger, more systemic change.

On Feb 4. 2016, the Fair Food Standards Council released its third report on the state of the Fair Food Program. The Fair Food Standards Council is a separate non-profit organization that was established to oversee the implementation of the Fair Food Program by monitoring its development and recording its processes, grower compliance, and results. It works in collaboration with the CIW to ensure that the program model is adequately maintained and that workers' grievances are investigated. The report details the background, process, and outcomes as well as its limitations and future opportunities of the FFP. It can be found here: http://www.fairfoodstandards.org/reports/