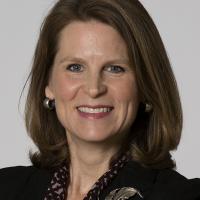 Elizabeth H. Shuler is president of the 57 unions and 12.5 million members of the AFL-CIO. A visionary leader and longtime trade unionist, Shuler believes the labor movement is the single most powerful vehicle for progress and that unions are a central force in leading lasting societal transformations. She is committed to busting myths about labor, leveraging the labor movement’s diversity for innovative approaches to social justice and making the benefits of a union voice on the job available to working people everywhere.

Shuler is the first woman to hold the office of president in the history of the labor federation. She was elected by the AFL-CIO Executive Council on Aug. 20, 2021, after the unexpected and untimely passing of her predecessor, Richard Trumka.

In 2009, Shuler became the first woman elected to the position of secretary-treasurer at an AFL-CIO convention and the youngest woman ever on the federation’s Executive Council. As secretary-treasurer, she served as the chief financial officer, turning deficits into surpluses and steering the federation through multiple fiscal crises, including the COVID-19 pandemic. In addition to her stewardship of the federation’s finances, she led the AFL-CIO’s initiatives on the future of work, retirement security, the clean energy economy, public safety reform, workforce development, and empowering women and young workers.

Shuler grew up in a union household—her father, Lance, was a power lineman and longtime member of Electrical Workers (IBEW) Local 125 at Portland General Electric and her late mother, Joyce, worked as an estimator in the company’s service and design department. In 1993, Shuler was hired at Local 125, where she was thrust into a full-fledged campaign to help the clerical workers organize, an experience that underscored the importance of building mobilizing capacity within the local union, particularly for women workers.

When energy giant Enron Corp. tried to muscle electricity deregulation through the Oregon Legislature, Shuler worked with a broad-based coalition of labor, community and environmental activists to challenge and ultimately overcome Enron’s powerhouse lobbying campaign, a victory that sparked her passion for mobilizing workers to make change even when faced with overwhelming odds.

In 1998, Ed Hill, then-secretary-treasurer of the IBEW, took notice of Shuler’s outstanding work and temporarily assigned her to California where she mobilized IBEW members to help defeat Prop. 226, the so-called paycheck protection initiative that threatened to silence union members in the political process. That victory prompted John J. Barry, president of the IBEW at the time, to hire her as an international representative in the union’s Political/Legislative Affairs Department in Washington, D.C. In that role, Shuler mobilized local unions across the country and frequently lobbied Congress on a range of issues important to working families. In 2004, she was promoted to assistant to the international president, where she advised President Hill, who had succeeded to that position, in driving the agenda of the nearly 1-million member union.

Shuler is not afraid to think big, take risks and do things differently. She looks at technological change as an opportunity to strengthen worker voice and to carve new pathways for workers to learn skills and stay relevant in a changing economy. She knows digital tools can help workers organize in new and powerful ways, forge community alliances and advance issues that matter to working people.

Shuler believes unions are the single greatest force for economic fairness and equality, and a collective bargaining agreement is the best tool for achieving justice for all working people, especially for women, immigrants and people of color.

Shuler serves on the boards of the National Women’s Law Center; the Institute for Women’s Policy Research; the AFL-CIO Housing Investment Trust; the Alliance for Retired Americans; the Solidarity Center; the Committee on Workers’ Capital and the Women’s Committee of the International Trade Union Confederation; and chairs the board of directors of the Economic Policy Institute. She is a graduate of the University of Oregon with a degree in journalism. Shuler lives with her husband, David Herbst, and their black labrador retriever, Trader, in Washington, D.C.