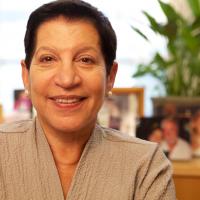 Deborah (Debby) King has had a long history with the labor movement, starting when she was a student at the ILR School working as a union organizer for District 65 during summer vacations. Since then she has served in various union roles, including Executive Vice-President for Collective Bargaining at 1199SEIU.

As a union leader, Debby has taken a leadership role in supporting the development of other union women. She participated in the first programs of Cornell's Institute for Women at Work and as a teacher at UALE's annual Northeast Regional Summer School for Union Women. As Vice-President of 1199 in Connecticut she was the chair of a coalition of public-sector unions that won pay equity for women state workers, raising salaries by more than $40 million a year. In 1994 she worked full time as an extension faculty member at the ILR School in New York City. During that year she helped organize support for union women around domestic violence and work/family balance and, several years later, became Chair of the New York Union Child Care Coalition. Debby has been a part-time member of the extension faculty at Cornell ILR since 1995.

Since 1995 Debby has been the Executive Director of the 1199SEIU Training and Employment Funds, which cover 250,000 workers and 700 employers in New York, New Jersey, Massachusetts, Maryland, Florida and the District of Columbia. She is also Executive Director of the Health Careers Advancement Program which has worked with SEIU locals and employers to develop funds that support health worker educational and career mobility in ten states.

Debby lived and worked in Ireland where she introduced the Cornell trade union women's leadership program to Irish unions and taught that program and others for both the Irish Congress of Trade Unions and the Irish Transport and General Workers Union. She is a contributing author to the book "Trade Union Women in Nine Countries" edited by ILR Professor Alice Cook.

Debby is actively engaged in several Worker Institute projects; her work is closely aligned with the Equity at Work Initiative.