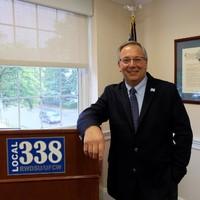 John R. Durso has been the President of Local 338 since 1999, when he was elected for the first time after spending nearly fifteen years in different positions at the union, including organizer, union representative and Assistant to the President.

In the years leading up to his employment at Local 338, Durso worked in a variety of supermarket and warehouse jobs, where he learned the value of being a union member. He credits this experience as a learning tool for how he leads the staff and membership. “I saw the good that the union did and had the potential to do,” he said, “I wanted to be a part of that.” Durso takes pride in being able to have a positive influence on the lives of his membership and believes “every day is an opportunity to do good for the people we have the privilege to represent.”