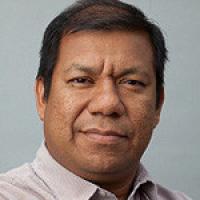 As a youth, Pablo Alvarado was raised in a village lacking running water and electricity. Working since he was five years old, Pablo spent several years as a day laborer in the United States, giving him first-hand knowledge of what it means to live and work at the lowest rung of society. This knowledge has stayed with him as he has dedicated his life to reducing the suffering of migrants in the United States. Pablo believes that if you protect those at the bottom of our society all of us are lifted.

Pablo co-founded the Institute of Popular Education of Southern California in 1991, Los Jornaleros del Norte day laborer band in 1996 and the National Day Laborer Organizing Network in 2001. He has won numerous awards and recognitions, including receiving the Next Generation Leadership Fellowship from the Rockefeller Foundation, which recognizes entrepreneurial, risk-taking and fair leaders who seek to develop solutions to major challenges of democracy. In 2004, Pablo was also recognized by the Ford Foundation’s “Leadership for a Changing World Program.” In August 2005, TIME Magazine named Pablo among the 25 most influential Hispanics in the U.S.