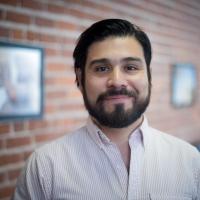 Victor Yengle (he/him) is a graduate student at Cornell University’s School of Industrial and Labor Relations (ILR), concentrating in Collective Representation. Before joining ILR, he worked for the Fair Food Standards Council (FFSC) for seven years overseeing the implementation of the Coalition of Immokalee Workers’ Fair Food Program. At the FFSC, he interviewed farmworkers about their working conditions and investigated complaints ranging from wage theft, sexual harassment, and health and safety violations. He was also responsible for coordinating the organization’s audit program, conducting site visits to farms to interview management, supervisors, and inspect farmworker housing conditions. In 2013, he earned his Bachelor’s from the University of Florida in Economics and Political Science. As an undergraduate, he organized multiple campaigns with the Student Farmworker Alliance, United Students Against Sweatshops (UF), and the Interfaith Alliance for Immigrant Justice. He grew up in Florida and became involved in community organizing as an undocumented youth. At ILR, he is interested in developing a deeper understanding of worker-led initiatives that guarantee access to enforceable remedies to redress human and labor rights violations.