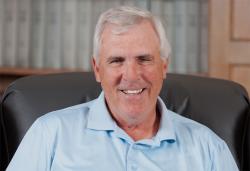 Ron Seeber is a Senior Vice Provost at Cornell University and a Professor of Industrial and Labor Relations. He received his B.S. in Industrial Engineering from Iowa State University in 1975. He attended the Institute of Labor and Industrial Relations at the University of Illinois at Urbana-Champaign, from which he received his A.M. (1977) and Ph.D. (1981).

In 2005 Professor Seeber was appointed the Vice Provost for Land Grant Affairs. He continues in that role by serving as the coordinator of the four New York State Contract Colleges at Cornell, and represents the University in its dealing with the State University of New York and the state government. In addition, his office supports the broader land grant mission of the University in all of the colleges. The ROTC programs on campus also report directly through Dr. Seeber to the provost.

Professor Seeber was appointed to the faculty at the School of Industrial and Labor Relations at Cornell University in 1980, and became the Associate Dean and Director of Extension in 1987, a position in which he served until the end of 1999. He is also an Associate Director of the Martin and Laurie Scheinman Institute on Conflict Resolution.

I teach in the areas of collective bargaining, and more generally negotiation and dispute resolution.

My research focus has been on negotiations, conflict resolution, industrial relations in various private sector industries, as well as conflict management in organizations.